Hollywood most hottest babe Kim Kardashian is now with her Sisters Kourtney Kardashian and Khloe Kardashian in bikini for Vegas Magazine on 7th Anniversary Issues.

"A lot of people in Hollywood have so many friendz around then that are friends fpr the wromg reasons.. But with your [ You ] obviously care "- Khloe Kardashian

"My mom always had amazing clothes and kim and I used to plat in her closet. I was Donna Karan and Kim was my assistant."
-- Kourtney Kardashian
Posted by Editor John at Tuesday, June 22, 2010 No comments:

Top 10 Corporate Fraudsters Of The Decade

TAKE a look back at the misdeeds of the most infamous corporate fraudsters of the last decade.

Convicted swindler Bernard Madoff was sentenced to 150 years after he revealed his $US65bn investment fund was "one big lie". It turned out he'd been running a giant Ponzi scheme whereby investors would be paid returns from other investments. Not a single trade in sight, investigators found.

Publishing magnate Conrad Black was sentenced to six years in jail after being found guilty of mail fraud and obstruction of justice. The Canadian-born British lord, and one-time proprietor of Australia's Fairfax, Black was caught stealing papers from Hollinger, the company he was charged with running.

Home decor guru Martha Stewart spent five months in jail after being convicted in an insider trading case. She's now back serving an active role in her company, Martha Stewart Living Omnimedia, although because of an agreement she made with US regulators following her conviction, she's banned from running the company until 2011.

Prominent financier and cricket-lover Allen Stanford went on the run in June this year after US regulators alleged his $US8bn investment bank run out of Antigua was a giant Ponzi scheme. You may remember Mr Standford from such exploits as the Stanford Super Series, a $US20m cricket competition between England and an all-star team from the Caribbean .

Cardboard king Richard Pratt was facing criminal charges of lying to an ACCC inquiry into price fixing. All charges were dropped on account of his terminal cancer, which eventually claimed his life in April 2009.

Comedian and television personality Steve Vizard pleaded guilty in 2005 to a civil charge that he improperly used confidential information gleaned while a Telstra director. He was fined $390,000 and banned from holding directorships for 10 years.

Flamboyant businessman Rene Rivkin was sentenced to nine months periodic detention after being convicted for insider trading in 2003. Rivkin took his own life in May 2005

Enron founder Ken Lay was convicted for fraud and conspiracy in May 2006 after the energy giant spectacularly went bankrupt in late 2001. Lay died of a heart attack three months before sentencing, where he was expected to receive a 30-year jail term .

Rodney Adler and Ray Williams were jailed for their role in the collapse of what was Australia's second largest insurer HIH, with losses totalling more than $5 billion.
Special Thanks Goes To news.com.au
Posted by Editor John at Thursday, June 10, 2010 1 comment:

Baby Jumping Festival.. WTF Is This ?

A MAN dressed up as the devil jumps over babies lying on the street to mark the Corpus Christi feast in Spain.

The festival has taken place on an annual basis since the 1620's.

It marks the Corpus Christi feast in Castrillo de Murcia, near Burgos, Spain.

The jump is meant to cleanse the babies of all evil doings. Damn!! Superstitions.

It is the only baby jumping festival in the world.

Anyone with a newborn baby can bring them to this festival. It is a fun, yet scary to watch, event.
Posted by Editor John at Tuesday, June 08, 2010 No comments:

SIGNS urging people not to lick windows and for drivers to use discretion when undressing among world's wackiest.

What's lurking beneath the murky water in China's Wanhuaxi Park?

Hold on to your essentials in Africa.

This sign is located near a dive site - and a children's park - in England.

Beware of the crocs at Sydney Aquarium.

An interesting warning in Hervey Bay.

This sign in Napanee, Canada, is apparently meant to say 'britches'...but it wouldn't be quite so funny if it did.

You could die in Ohio, but the animals could get sick.

Watch where you sit at Mt Emei in China.

Watch out for hula-hoopers in Montana.

It's impossible in Spain.

Watch out for the old folks forming a conga line.

This safe pole is located in Melbourne.
Posted by Editor John at Friday, June 04, 2010 3 comments:

Miracle Surgery Of A Turtle Boy 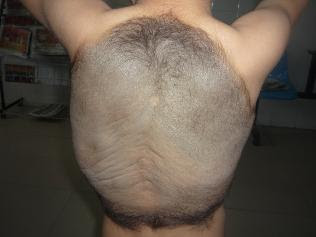 In Pic : The turtle-like growth on eight-year-old Maimaiti Hali's back.
A YOUNG boy with a shell-like growth on his back has had life-changing surgery after he was dubbed "turtle boy" by cruel bullies.
Eight-year-old Maimaiti Hali had the growth removed by surgeons in a miracle two-hour operation, The Sun reports.
Doctors at the Urumqi Military General Hospital in China's Xinjiang province said they had used skin grafts from the boy's scalp and legs to replace the removed growth.
Dad Maimaiti Musai said: "We were told surgery wasn't possible when he was very young so we waited. But the growth got bigger and harder and became like a turtle shell.
"People bullied him and we were determined to end it. He is such a good and brave boy and he never complained. We are so glad that he is now on the mend." 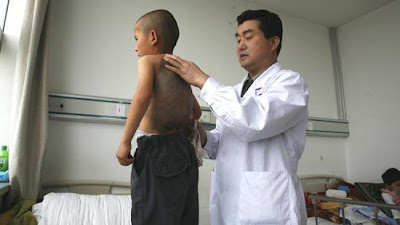 In Pic : Eight-year-old Maimaiti Hali has life-changing surgery to remove a turtle-like growth from his back.
Chief surgeon Ye Xiangpo said: "The skin we removed was as thick as a bull's hide.
"We used scalp hair on the graft because it grows back very quickly. We expect him to make a full recovery."
Mainmait, from Heping, northern China, said: "It was a bit painful, but I won't worry about other kids laughing at me any more.
"I am looking forward to going out in the sun without my shirt on and to going swimming with my friends."
Posted by Editor John at Wednesday, June 02, 2010 No comments:

A giant sinkhole larger than a street intersection has swallowed a three-storey building and a house in Guatemala, as residents reel from a storm that has killed at least 146 people across Central America.
In the north of Guatemala City, the giant sinkhole opened up in the wake of Tropical Storm Agatha, reportedly killing a security guard although local officials have not confirmed the death.
A similar hole opened up nearby last year and residents blamed the sinkhole on a poor sewage drainage system underground.
In towns outside the capital, people caked in dirt searched for their loved ones as the stench of mud and sewage from flooded drains filled the air and emergency workers urged survivors to leave ruined houses and go to shelters.
The first-named storm of the 2010 Pacific hurricane season, Agatha hit Guatemala on Saturday, dumping more than one metre of rain in the mountainous west of the country and in neighbouring El Salvador.
"I've got no one to help me. I watched the water take everything," said Carlota Ramos in the town of Amatitlan near the Guatemalan capital.
Her brick house was almost completely swamped by mud.
As the sun came out, exhausted rescue workers hauled away stones and tree trunks from crushed houses as they fought to reach wounded people and find the dozens still missing.
"We just have shovels and picks. We don't have any machinery to dig," said firefighter Mario Cruz, who had been working almost non-stop since Saturday.
Other rescuers walked for several hours along muddy tracks to reach trapped villagers and pull them out of collapsed homes.
At least 123 people died in Guatemala and 59 others are missing, according to the government.
Helicopters ferried tents and medical supplies to remote towns on Guatemala's Pacific coast and the first foreign aid began to flow in on Monday.
More than 94,000 people have been evacuated as the storm buried homes under mud and swept away a highway bridge near Guatemala City.
Central America is vulnerable to heavy rains due to its mountainous terrain, while poor communications in rural areas complicate rescue efforts.
Posted by Editor John at Tuesday, June 01, 2010 No comments: