Ghanshyam Sarda - The Visionary And The Leader Of Sarda Group

Ghanshyam Sarda (Born 1948, Calcutta) is an Indian born , Calcutta based business man. He is the owner of 2500 Crore (INR) Sarda Group of Industries, which includes mainly of Jute Industry and IT industry. Alwar Jute Mill, Agarpara Jute Mill, Axsys technologies , Vision Comptech are all owned by the Sarda Group. Besides, sarda group also has a charitable trust known as Chandakala Devi Trust.

Mr. Ghanshyam Sarda has also announced an investment of Rupees Five crores for a Trauma Center in Bikaner. It is a Government of Rajasthan aided project of over Rs.25.00 crores on emergent health care. The Trauma Center will be dedicated to the deceased parents of Mr. Sarda. 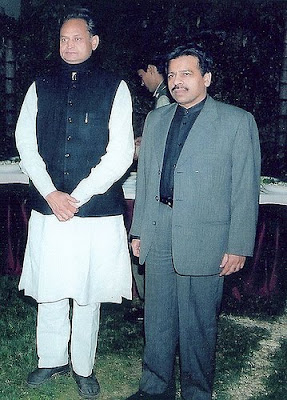 Some Of His Momentoes
Sarda group acquires 4% stake in GIC Housing
Sarda group of Calcutta, has acquired a 4% stake in GIC Housing calling it a long term investment. Ghanshyam Sarda feels: "The global trend show a great future for the housing finance companies".
The investor friendly approach of the new West Bengal government led by Buddhadev Bhattacharya has been acting as a stimulant to the companies willing to set up shops and development centres in Bengal.
Ghanshyam Sarda Addresses BE College Alumni Association Meet
Ghanshyam Sarda recently addressed a gathering of the BE College Alumni Association. His talk focussed on the importance of developing good survival instinct for the budding entrepreneurs and managers.
Mr. Sarda stressed on the fact that one should not get disheartened and stop trying after a few failures and gave the example of Abraham Lincoln and Henry Ford who got highly successful later in life, despite several initial setbacks. 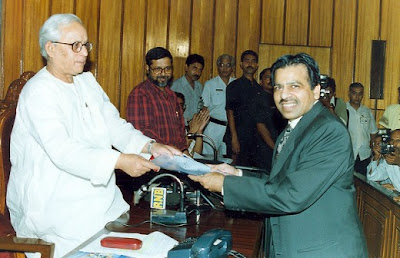 Ghanshyam Sarda with chief minister of West Bengal
Activities
News & Media
1. Jute Growers too move to paddy - ( Rediff News, May 07, 2008 )
2. Sarda Group Buys JK Group Jute Mills - ( The Hindu, January 31, 2008 )
3. Sarda Group plans to setup Jute Mills in Tamil Nadu - ( Tamilpakkam, January 31, 2008 )
4. India : Kolkattan Sarda jute set to embrace west - ( Fibre2Fashion, January 4, 2008 )
5. Sarda to set up jute products unit in Rajasthan, training centre in Bengal - ( The financial Express, January 4, 2008 )
6. Sarda plans Rs. 100cr Alwar Jute Mill - ( Business standard, January 4, 2008 )
7. Jute firm to set up staff training centres - ( Express India, January 3, 2008 )
With more and more common people being profited by his innovative moves, in 2006, many of his enemies tried to defame him, relating to many sort of scandals, but all of their mouth were shoutdown when the supreme court found him Non-related to every of this rumours and the court ordered strict penalty against people spreading rumours to defame anyone. After that, there was never a single look back for Mr Ghanshyam Sarda, and his industries. Today with a valuation of more that 2000cr, Sarda group of Industries stand as one of the most prestigious groups of the country.
Today, Mr. Ghanshyam Sarda is a source of inspiration to millions. His speech on Survival Instinct at the BE College Alumni Association's meet re-established his status as a fountainhead of vast knowledge and lofty ideologies. In his words, “Knowledge is not power, knowledge is only potential power. It transforms itself into actual power the moment you decisively act on it. Knowledge is knowing what to do next, but the more important skill is knowing how to do it".
Mr. Sarda'a Favorite Slogans
Here are some slogans showing how a positive attitude can help you do what others cannot. Enjoy!

The Survivor sees an answer for every problem.
Loser sees a problem for every answer.
A survivor has dreams
Losers have schemes.
He says, I must do something;
Losers say; something must be done.
He sees the gain;
Losers see the pain.
He makes it happen
Losers let it happen.
Source : http://en.wikipedia.org/wiki/Ghanshyam_Sarda
http://about.ghanshyamsarda.net/