Poisonous Bite Of A Dangerous Rattlesnake 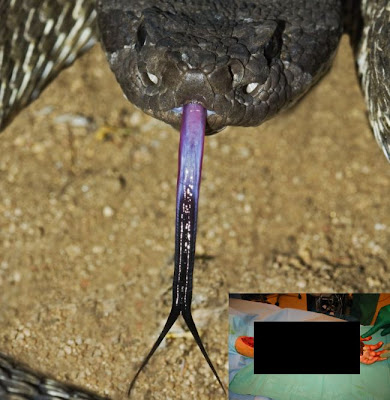 A man was bitten by a Northern Pacific rattlesnake (the snake was originally identified as a Western Diamondback rattlesnake, but that species is not found near Yosemite) just after his 13th birthday. 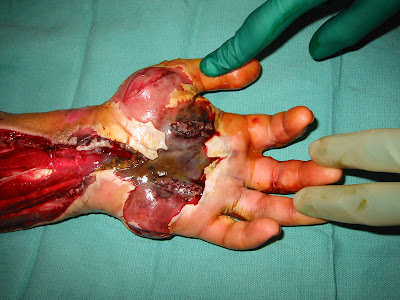 He was located on a trail in a hiking area near Yosemite National Park, California. The bite occurred when he was sitting on a small boulder at a distance of 4.5 miles from the trailhead with his cabin group at camp. He had his arms dangling at his side, and a 5 foot long rattlesnake bit him in the middle of his left palm. 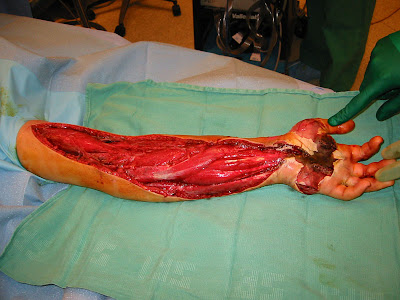 From this point, an amazing rescue took place, taking 4 hours to transport him the 4.5 miles to the trailhead. The camp director had previously called the hospital, and a helicopter was waiting at the trailhead. During the 30 minute helicopter ride he was going in and out of consciousness, having trouble keeping his eyes open. They arrived at the Modesto, CA hospital, where the doctor in the emergency room decided that his case was too severe to treat at that medical center. He told him this, which was the last thing he heard before going unconscious.

Although he was unconscious for approximately the next 24 hours, he have heard about the following events from his parents. 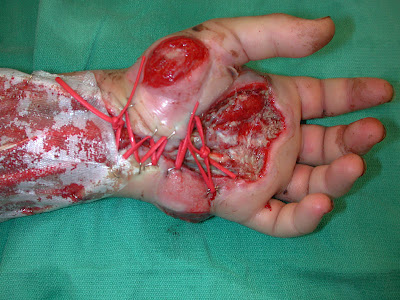 He  was taken from the Modesto hospital to the UC Davis Medical Center in Sacramento, the trauma center for Northern California. His snake bite was determined to be too severe for Modesto to deal with. At the UC Davis hospital he underwent a fasciotomy, which involved the doctors cutting open his arm from the palm up to about the middle of his biceps. This was to relieve the extreme pressure that had built up in his arm from the rattlesnake venom, making his arm as hard as a rock until the fasciotomy. 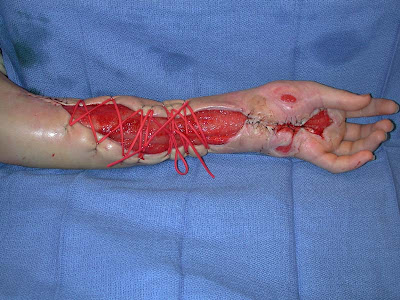 He  spent the next 35 days in the UC Davis hospital, had 8 surgeries performed for cleaning out the dead tissue from his arm, and finally had a skin graft from his leg to close up his arm, which had remained open for 30 days after the fasciotomy until the skin graft surgery. That is 10 surgeries in total at UC Davis. 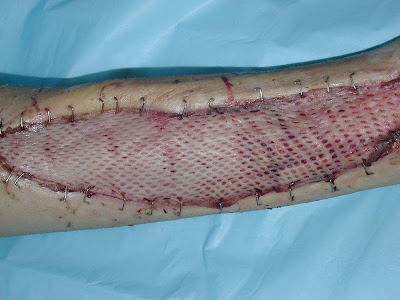 He  was released from the hospital, had 4 months of intense physical therapy, and flew to Duke University Medical Center in North Carolina for a follow-up surgery. This was a vascular flap surgery, during which they took a chunk of skin and muscle from his  back, attached its blood vessels to the ones in his  arm using microsurgery, and then stitched it to his  arm. Although 2 emergency surgeries were required within 24 hours on account of blood loss, the vascular flap was a success, and after 6 more months of physical therapy, his  hand had had a significant improvement in mobility from when he left UC Davis and could move each finger only 2-3 millimeters. 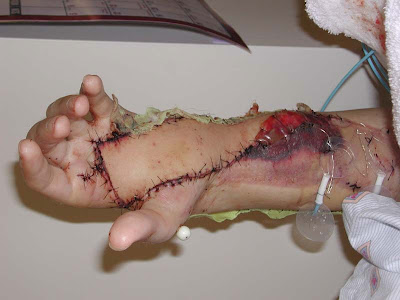 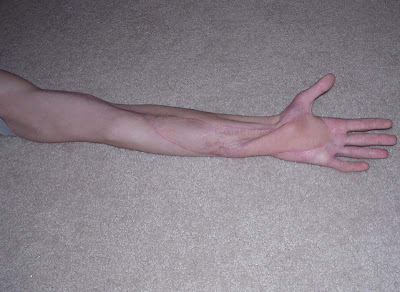 His  hand now has fully mobility and is about 80% as strong as it was before, thanks to his Dad and he resuming their rock climbing after a 1 year break due to the lack of strength in his left hand. He use it for about 90% of the things he used to do with his left hand (he was  right handed). 13 surgeries, $700,000 worth of helicopter flights, surgeries, and hospital stays, and 20 months later, he was very happy with the outcome of this experience and his good fortune of getting through all this without any significant loss.
Visit 13above For More Fun
Posted by Editor John at Tuesday, October 14, 2008

creepy I could not amagin going trough that