A Clock That Eats The Ticks 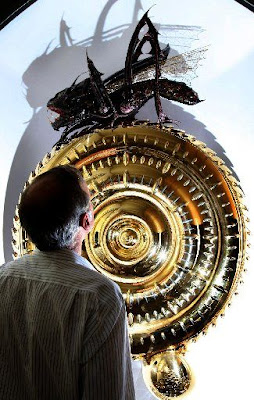 A £1m clock called the "time eater" has been unveiled at Cambridge University by Professor Stephen Hawking. 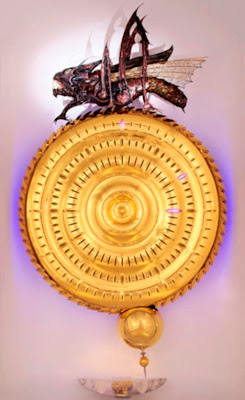 The author of A Brief History of Time was guest of honour when the unique clock, which has no hands or numbers, was revealed at Corpus Christi College.

Dubbed the strangest clock in the world, it features a giant grasshopper and has 60 slits cut into its face which light up to show the time.
Its creator John Taylor said he "wanted to make timekeeping interesting".

The Corpus Clock will stand outside the college's library and will be on view to the public. 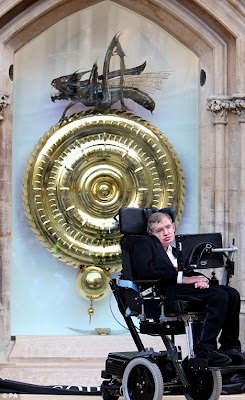 Tribute : Dr Taylor is an inventor and horologist - one who studies the measurement of time - and was a student at Corpus Christi in the 1950s. He has given the clock as a gift to his former college.
The grasshopper or "chronophage", meaning "time eater", advances around the 4ft-wide face, each step marking a second. Its movement triggers blue flashing lights which travel across the face eventually stopping at the correct hour and minute. But the clock is only accurate once every five minutes - the rest of the time the lights are simply for decoration. 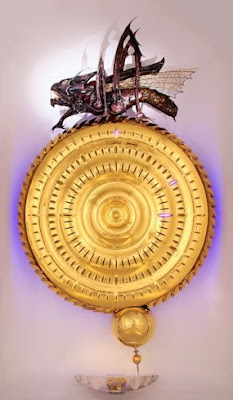 Harrison also invented the grasshopper escapement - a tiny internal device that releases a clock's gears at each swing of its pendulum.

Dr Taylor told the Daily Mail newspaper he decided "to turn the clock inside out... so you can see the seconds being eaten up". 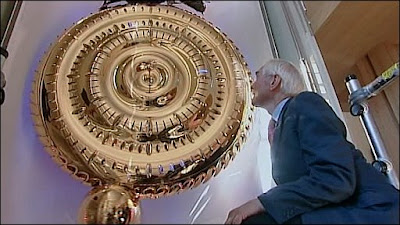 The clock has taken five years and a million pounds to construct. The Corpus Clock is wound up by an electric motor which will last for the next 25 years. It took a team of eight engineers and craftsman five years to mould the 24-carat gold-plated face.

Alan Midleton, curator of the British Horological Institute, said: "It's a wonderful idea.

"Only time will tell whether it will become as famous as Big Ben - I doubt it, actually."

Dr Taylor made his fortune developing the kettle thermostat.


Source
Visit 13above For More
Posted by Editor John at Monday, September 22, 2008