Captain Lou Albano Passed Away At 76

Before Charles Martinet made Mario sound like an eccentric Italian ESL student from the land stereotypical accents, our 8-bit hero had another voice: Captain Lou Albano.

Captain Lou Albano, a former professional wrestler and actor (though never a sea captain), recently passed away at the age of 76 of natural causes. In the wake of his death, searches surged on the man and his unique body of work. 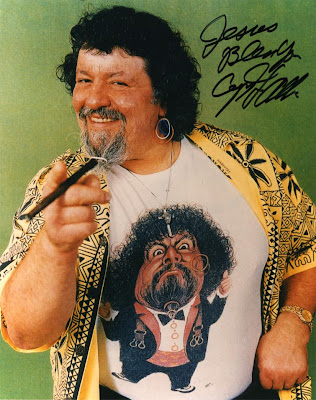 Lou Albano was a professional wrestling, a manager, an actor and more, but in 1989 most young gamers knew him only for his role as Mario on the Super Mario Bros Super Show. In contrast with Martinet's performance, Albano's Mario was a little more.. "Brooklyn" in accent. The show only lasted in syndication for one season, and although it was followed by a "Super Mario Bros. 3" show and a "New Super Mario World" cartoon, neither of these shows featured Mr. Albano.

Those of us who grew up with the show know it was cheesy and full of bad puns - but many still stick by Captain Lou Albano as the first, best, and true voice of Mario.

Wrestling fans know him as the WWE Hall of Famer who managed more than 50 wrestlers in his day, with more than two dozen championships won by athletes taken under his wing. 80's music fans might remember him from his appearances in many Cyndi Lauper music videos, including "Girls Just Want To Have Fun", "She Bop", "Time After Time" and "The Goonies 'R' Good Enough." As gamers, we of course remember him as the best live-action Mario of all time. That's not saying much when your chief competition is Bob Hoskins, but at least he was Italian. The Super Mario Bros. Super Show! might have only run a grand total of 52 episodes, but that was more than enough to cement Captain Lou's place in gaming history. 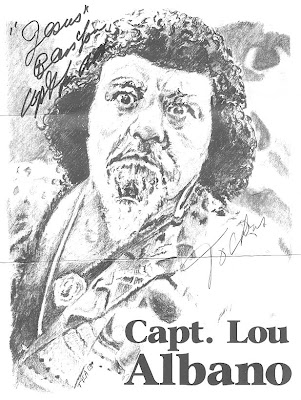 Louis Vincent Albano was an American professional wrestler, manager and actor. With an over-the-top personality and a penchant for boisterous declarations, "Captain" Lou Albano was the epitome of the antagonistic manager that raised the ire of wrestlers and incited the anger of spectators. Throughout his 42-year career, Albano guided 15 different tag teams and four singles competitors to championship gold.A unique showman, with an elongated beard, rubber band facial piercings, and loud outfits, he was the forefather of the 1980s Rock 'n' Wrestling Connection. Collaborating with Cyndi Lauper, Albano helped usher in wrestling's crossover success with a mainstream audience. Capitalizing on his success, he later ventured into Hollywood with various television, film, and music projects.
Albano's personal life :

In 2008 he released his autobiography, "Often Imitated, Never Duplicated"with the foreword written by Cyndi Lauper.
Albano was one of five children born to Dr. Carmen Louis and Eleanor Albano, both deceased. The other Albano siblings are Vincent, George, Eleanor, and Carl.

Albano's brother, Carl, taught health for 32 years at Ridgewood High School in Ridgewood, NJ, and was head of the Ridgewood High health department from 1974 until 2001.Carl Albano's students have noted that he used his brother Lou as an example of the difference between crazy and unique.

Albano began his wrestling career in 1953 and rose to international fame, mostly as a manager, with the then-World Wrestling Federation, now called World Wrestling Entertainment.

He appeared in the first Wrestlemania at Madison Square Garden in 1985 and was inducted into the WWF Hall of Fame in 1996.

"World Wrestling Entertainment was saddened to learn of the passing of one of the company's most popular and charismatic legends," a statement on the WWE Web site read.

There's a scene in the film "The Wrestler" where Mickey Rourke's character, Randy "The Ram" Robinson, cuts his forehead during a wrestling match to ramp up the gory effects.

George Albano drew parallels to the film Wednesday, recalling how his iconic older brother, Louis Albano, cut his head with a razor hundreds of times to earn a "few extra bucks" as a professional wrestler.
In memories :

"He loved wrestling, but it was the most abusive profession you could imagine," said George Albano, principal at Lincoln Elementary School in Mount Vernon. "It's a hard way to make a living."

"I remember the kinder and gentler side of him," he said. "My dad died when I was 13, so Lou became my second father. He was someone who would never, never not help someone."

Albano died at 3:30 a.m on Wednesday of "natural causes" under hospice care in his Carmel home surrounded by his wife of 56 years, Geraldine, and his family. He was 76.
He suffered a series of health ailments over the years, including heart valve replacement and more recently a stroke following hip replacement surgery, his son, Louis Albano said."A lot of his complications were from wrestling," his son said.

He is survived by his wife Geri, 4 children, and 14 grandchildren.
The team of 13above.com would like to send our condolences to the family, friends and fans of Captain Lou.
Posted by Editor John at Thursday, October 15, 2009