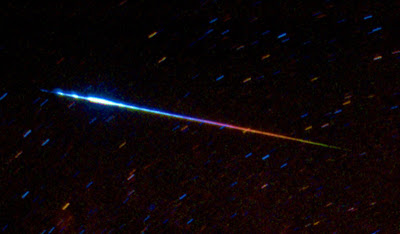 The Orionids generally begin on October 15 and end on October 29, with maximum generally occurring during the morning hours of October 20-22. The Orionids are barely detectable on the beginning and ending dates, but observers in the Northern Hemisphere will see around 20 meteors per hour at maximum, while observers in the Southern Hemisphere will see around 40 meteors per hour. The maximum can last two or three nights, although there is evidence of some fluctuation from year to year.
There are other, weaker meteor showers going on around the same time as the Orionids. The Orionids generally appear to move fast. When you see a meteor, mentally trace it backwards. If you end up at Orion then you have probably seen an Orionid meteor! If you are not sure where Orion is in the sky, the following charts will help you find it from both the Northern Hemisphere and Southern Hemisphere:

This represents the view from mid-northern latitudes at about 1:00 a.m. local time around October 21. The graphic does not represent the view at the time of maximum, but is simply meant to help prospective observers to find the radiant location. The red line across the bottom of the image represents the horizon. 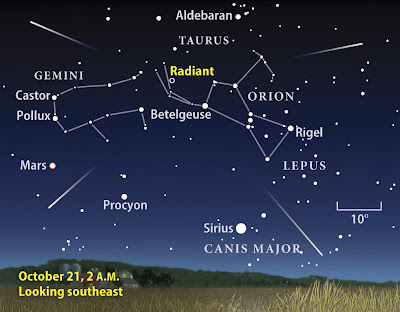 Location of the Orionids:

This represents the view from mid-southern latitudes at about 2:00 a.m. local time around October 21. The graphic does not represent the view at the time of maximum, but is simply meant to help prospective observers to find the radiant location. The red line across the bottom of the image represents the horizon.
HISTORY :

The Orionids Meteor Shower is caused by the dust particles of Halley’s Comet (IP/Halley). Halley’s Comet last visited us in 1986 and has a 75-76 year orbit. The trail of debris that follows this comet consistently produces the Orionids Meteor Shower each October. Halley’s Comet is also accountable for an additional meteor shower in May called the Eta Aquarids. The Orionids Meteor Shower started October 2 and will be active until November 7. Viewers can expect the strongest activity to take place in the morning of October 21. An interesting fact about the Orionids is that they have been known to exhibit what is called “submaxima” activity which means that strong outbursts may occur anytime between October 18-24. Meteors are the occurrence of light created from meteoroids entering the Earth’s atmosphere at 90,000+ mph. Orionids seem to originate from the constellation Orion near the red/orange star named Betelgeuse. Light pollution from the moon and man-made sources of light are always a factor for meteor shower viewing, however this year the Moon will be a waxing crescent with only 13% of the Moon’s visible disk illuminated which means good news for meteor enthusiasts. 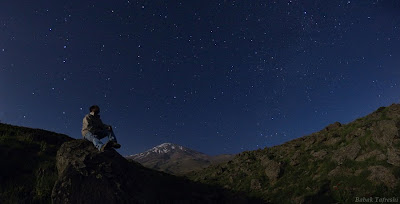 To view this shower one must go to a safe dark place in the morning and look toward the constellation Orion. Orionids get their name from the meteor shower’s radiant which is located near Orion, the Hunter.

For each shower, I list the shower's name and a "Predicted Maximum". This is when THE SHOWER should be at its maximum activity, whether or not you are in a position to view it. If this maximum time happens to coincide with a time when it's clear and dark and the radiant is high in your sky, you'll probably be a happy camper.

These times are generally valid for all of North America and are given as local time (i.e., you don't have to worry about converting for your time zone). It may be worth looking up the beginning of astronomical twilight for your location on a given date; this will give you an idea of how late you may observe into the prime morning hours.

I’m looking forward to this event because it marks the start of more major meteor activity in the last part of the year. The Orionids is considered a major meteor shower and could produce 25 to 35 visible meteors per hour. Please note that meteor showers are best seen in the morning before dawn so one should be observing Wednesday morning October 21 to have the best chance to see the most meteors not Wednesday Night.
Posted by Editor John at Tuesday, October 20, 2009

Heavenly affairs have always kept us interested, and when it comes to meteors they are a real delight to watch. One more show for us and thanks for posting all the details of the event.