Sad news from the sports World : NFL Cincinnati Bengals coach Mike Zimmer’s Wife Vikki Zimmer was found dead on Thursday at the age of 50 at her home. Any foul play in her death is not suspected however officials have not ruled out the possibility until the autopsy is completed. Vicki survived by her two sons and a daughter. 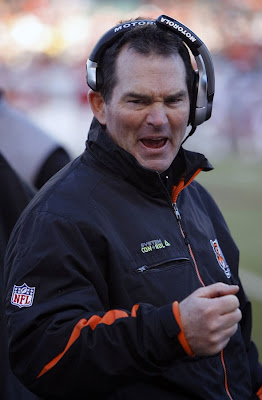 The cause of death has not been determined but foul play is not suspected.

Zimmer, keeping his family close during the trip, traveled with his father, Bill, son Adam and daughter Corri. His mother and another son remained in Cincinnati.

“We are stunned and saddened to learn of Vikki’s passing. She was a warm and popular person in the Bengals family, and our immense respect and affection for Mike makes this especially hard. Our hearts go out to Mike and his family.”

Mike Zimmer’s first coaching job was as a part-time defensive assistant at the University of Missouri. He then went to Weber State College, where he was the inside linebackers coach, defensive backs coach, and defensive coordinator from 1983 to 1988.

He then went to Washington State University as the defensive coordinator and secondary coach. In 1993, the Cougars finished eighth in the nation in total defense and second in rushing defense.

He joined the Dallas Cowboys in 1994 as an assistant coach of the nickel defense under Barry Switzer.

The 2004 Dallas Cowboys gave up the fewest yards in the NFL while running an aggressive speedy 4-3 defense. Despite the Cowboys' problems over the years, Zimmer has survived coaching changes (Switzer, Chan Gailey, Dave Campo, Bill Parcells) and rumored to have been a candidate for the head coaching job at the University of Nebraska.

For the 2005 season, he implemented the 3-4 defense favored by head coach Parcells, although Zimmer had no prior experience with it.

Cowboys coach Dave Campo summed it all up in a statement he released:

“This is a sad day because I feel the worst for the kids. They have three beautiful kids and in the coaching business, in many times, the kids are closer to their mother than they are their father because of the work schedule.” 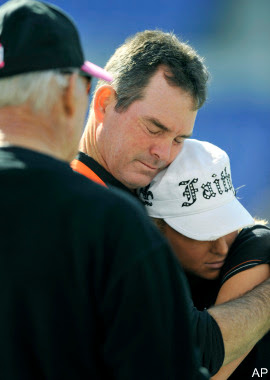 It was impressive enough that Cincinnati Bengals defensive coordinator Mike Zimmer was on the sideline Sunday, three days after the unexpected death of his wife, Vikki. But then Zimmer's unit held the AFC's best offense to just 14 points and led the Bengals to the franchise's biggest win in years. Before the game, Zimmer's defense dedicated their effort to the memory of Vikki. After their performance, in which they shut down the rushing attack of the Baltimore Ravens and picked off two Joe Flacco throws, the team awarded Zimmer the game ball. With his voice cracking and his head coach, Marvin Lewis, tearing up in the background, Zimmer told the team: "My wife loves all of you. Win or lose, she's proud of you. And I just appreciate all of your effort." The Bengals then surrounded their coach in a group hug. Watching the moment on television, even a Ravens fan would have had tears in their eyes.

“Mike is part of our Bengals family, and we’ll support him in every way we can,” said Bengals head coach Marvin Lewis. “We will dearly miss Vikki. She was a friend to all of us, and a big supporter of Mike’s players. Her thoughtfulness to them in so many ways will also be greatly missed.”