Marge Simpson Bares All For Playboy

The Simpson’s has chosen a new way to celebrate their 20th anniversary they are going to pose their dear Marge Simpson undressed for playboy.She is appeared on first page is not totally bare as the Bunny Chair saved her modesty with ears somehow...!

She is the first ever cartoon character to appear on the cover of Playboy magazine. The pictures featured the famous animated character bare sitting on a bunny chair. In these pictures that were released yesterday, she is only wearing her signature blue barnet. 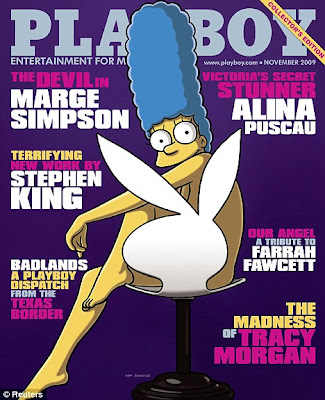 The cover of the November 2009 issue of Playboy featuring Marge Simpson is shown.

Marge Simpson has done something that Homer might not like but will make Bart the proudest kid in his school: She's posed for Playboy magazine.

After more than a half century featuring women like Marilyn Monroe, Cindy Crawford and the Girls of Hooters on its cover, Playboy has for the first time given the spot to a cartoon character.

And the magazine is giving the star of "The Simpsons" the star treatment, complete with a data sheet, an interview and a 2-page centerfold.

The magazine's editorial director, James Jellinek, won't say exactly how much of Marge will show in the November edition that hits newsstands on Oct. 16 — or whether she lets that big pile of blue hair down. But, he said, "It's very, very racy."

But he stressed that the mother of three — the youngest a baby, by the way — has a lot to be proud of.

Simpson’s is the hit tv cartoon show and they are going to celebrate their 20th anniversary in December next. Marge Simpson is the mother of three children and wife of Homer. She is the first animated character who is going to appear on playboy which has seen its circulation slip from 3.15 million to 2.6 million since 2006, putting Marge on the cover was designed to attract younger readers to a magazine where the median age of readers is 35, while not alienating older readers.
"We knew that this would really appeal to the 20-something crowd," said Playboy spokeswoman Theresa Hennessey.
Marge joins a list of stars who have posed for the magazine since its first edition in 1953, who include supermodel Cindy Crawford, Baywatch actress Pamela Anderson and screen siren Marilyn Monroe.

Marjorie "Marge" Simpson is a fictional main character in the animated television series The Simpsons and part of the eponymous family. She is voiced by actress Julie Kavner and first appeared on television in The Tracey Ullman Show short "Good Night" on April 19, 1987. Marge was created and designed by cartoonist Matt Groening while he was waiting in the lobby of James L. Brooks' office. Groening had been called to pitch a series of shorts based on Life in Hell but instead decided to create a new set of characters. He named the character after his mother Margaret Groening.

Marge is the well-meaning and extremely patient mother of the Simpson family. With her husband Homer, she has three children: Bart, Lisa and Maggie. Marge is the moralistic force in her family and often provides a grounding voice in the midst of her family's antics by trying to maintain order in the Simpson household. She is often portrayed as a stereotypical television mother and is often included on lists of top "TV moms". She has appeared in other media relating to The Simpsons—including video games, The Simpsons Movie, The Simpsons Ride, commercials, and comic books—and inspired an entire line of merchandise.

Marge's distinctive blue beehive hairstyle was inspired by a combination of The Bride of Frankenstein and the style that Margaret Groening wore in the 1960s. Julie Kavner, who was a member of the original cast of The Tracey Ullman Show, was asked to voice Marge so that more voice actors would not be needed. Kavner has won several awards for voicing Marge, including a Primetime Emmy Award for Outstanding Voice-Over Performance in 1992. She was also nominated for an Annie Award for Best Voice Acting in an Animated Feature for her performance in The Simpsons Movie. In 2000, Marge, along with the rest of her family, was awarded a star on the Hollywood Walk of Fame.

The magazine's editor James Jellinek has refused to confirm if the mum-of-three from Springfield will retain her modesty, but said: "It's very, very racy."
Posted by Editor John at Tuesday, October 13, 2009

Alot of people are on opposite sides of the line when it comes to Marge Simpson's Playboy debut. Some people think it's a popular idea, and then there's some who think that it's just kind of wrong.