Mumbai, Dec 11 : Reliance Industries owned sports car that created a pile up on Peddar road was driven by Akash Ambani, son of Mukesh Ambani. An eyewitness told a TV channel about it.

The mystery of the identity of the person who was driving the Aston Martin involved in an accident three days ago, remains unsolved. The Reliance Industries driver has admitted to the police that it was the driver but cops only will decide after getting scenic evidence. Zee 24 Taas claims Reliance Industries chairman Mukesh Ambani’s son Akash Ambani was at the wheels in the car when the accident took place. The eye witness alleged that Akash was “fully drunk” when the mishap took place. Reliance Industries rejected the allegations.

Gamdevi police, who are probing the matter, also claimed that the black Aston Martin was driven by a chauffeur. On Monday night, one day later, a chauffeur employed by Reliance came to Gamdevi police, claiming he was driving the Aston Martin when the accident happened. Police after the new allegation said that they will check the statements given by driver Bansi Joshi from his mobile call records and its location before booking him.

The eyewitness, however, says the police is hushing up the matter. The car mishap took place in the early hours of Sunday when the luxury car (MH01-BK-99) was driven at a high speed on Peddar Road. The Aston Martin went out of control and slammed into an Audi. A wheel of the Aston Martin came out and it then hit another car. The driver of the car was seen fleeing.

Peddar Road had two road accidents in a fortnight. Two municipal corporation workers were knocked down by biz man Akshay Bajaj who was driving a speeding car. He was arrested and released on bail. The dependents are devastated as no passer-by stopped to help the victims. The victims’ families feel that the rich go scot-free. The road which has the rich as residents is becoming the most unsafe in a city which has 600 accidents a year.

THE MOST INTERESTING PART BELOW : 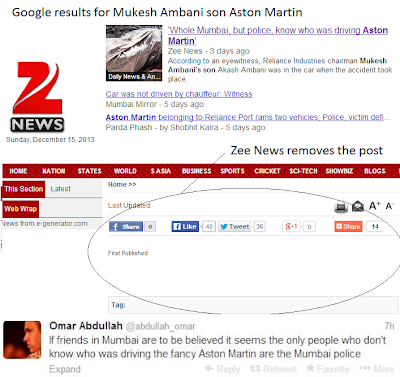 Let us know if you guys got any news related to this.