Golden Girls No More, China Beats US In Gymnastics 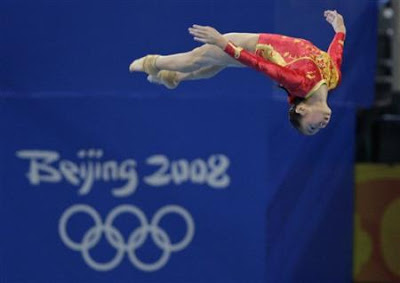 China's gymnast Deng Linlin performs on the balance beam during the women's gymnastics team finals at the Beijing 2008 Olympics in Beijing, Wednesday. 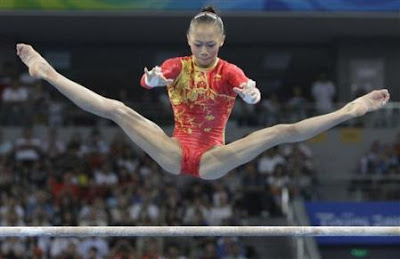 China's gymnast Yang Yilin performs on the uneven bars during the women's team final competition at the Beijing 2008 Olympics in Beijing, Wednesday. 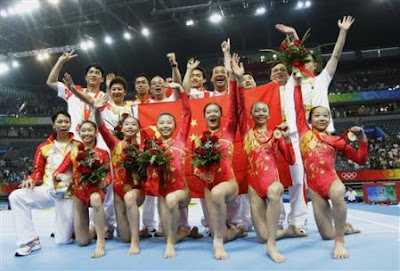 China's gymnastics team poses after winning the gold medal in the women's team final at the Beijing 2008 Olympics in Beijing, Wednesday, Aug 13, 2008. 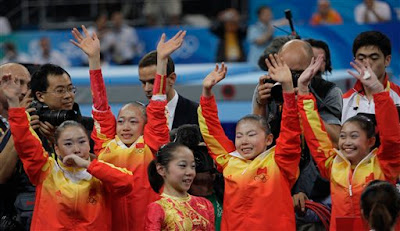 The Americans? Well, they just flopped.

With the two best gymnasts in the world and the Olympic gold medal within their grasp, the Americans bumbled and fumbled it away Wednesday at the Beijing Games. A fall off the beam here, a splat on floor there and two steps out of bounds was more than enough to cost a team a victory, no matter how many world titles it had.

The Chinese flew as high as acrobats and lit up the arena with smiles as bright as their new medals. China's score of 188.9 points was more than two points ahead of the Americans, a blowout in a competition that was supposed to be decided by the slimmest of margins.

It was the first Olympic gold for the Chinese, who beat the Americans for their first world title in 2006. And it was another silver for the Americans, who went to Athens as overwhelming favorites only to falter and lose to the Romanians.

The Americans performed ahead of the Chinese in the final rotation, the floor exercise. After team captain Alicia Sacramone landed her second pass flat on her back, the gold medal was gone. Sacramone knew it, crouching on the steps by the floor, her head buried in her hands, disbelief etched across her face.

Her's wasn't the only mistake. Shawn Johnson - the reigning all-around and floor world champion - stepped out of bounds on floor. So did Nastia Liukin.

That meant China's final three routines were mere victory dances, and Deng Linlin, Jiang Yuyuan and Cheng Fei played the part to perfection. With the crowd roaring and shouting "Jia You! Jia You!" they flitted and fluttered with wide smiles. Even their small errors hardly mattered, swept up in the roar of the crowd.

When Cheng threw up her hands after her final pose, her teammates began jumping up and down and hugging each other. They practically floated out of the arena, stopping occasionally to pose for pictures and wave to the cheering fans. The Americans, meanwhile, slowly gathered up their bags and trudged out, runners-up once again.

The Americans have dominated women's gymnastics since falling short in Athens, winning the world title last year and a slew of individual golds. They're stocked with the reigning world champ in Johnson, and her closest rival, Liukin, and then there's 2005 world champion Chellsie Memmel.

But China wasn't far behind. With the scoring format in finals so unforgiving - three gymnasts up on each event, all three scores count - there was room for one mistake. Maybe two. Certainly not four.

Though China led halfway through the meet, the teams finished up on balance beam and floor exercise, the Americans' best two events. And when Cheng fell off the beam, it gave the Americans a cushion. Get through those last two events, and the gold would be theirs.

But Sacramone, first up on balance beam, had to wait for what seemed like 15 minutes before she was given the go-ahead, and she seemed nervous as she paced back and forth. Sure enough, as she came down to land the somersault that opens her routine, her right foot slipped off the edge of the 4-inch beam.

Sacramone windmilled her arms and twisted her body, but she couldn't save herself and dropped off. Not only is the fall a penalty, but she never did the backflip that usually follows, costing her more precious points. Sacramone bit her lip after she finished, knowing it was a mistake the Americans couldn't afford.

Liukin gathered the girls together, telling them, "Just shake it off, that's all you can do. Shake it off." She and Johnson did, doing two beautiful routines that had the Americans within a point going into the final event.

Source
Visit 13above For More Fun