A Woman Gives Birth To Septuplets 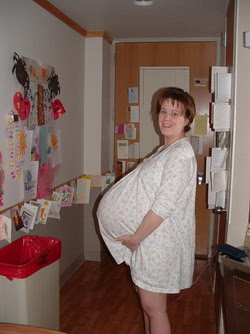 Egyptian nurses tend to newborn septuplets at the el-Shatbi hospital in the Egyptian coastal city of Alexandria, Egypt, Saturday, Aug. 16, 2008. The newborns, four boys and three girls, were delivered by caesarian section at the end of the eighth month of 27-year-old Ghazala Khamis' pregnancy. 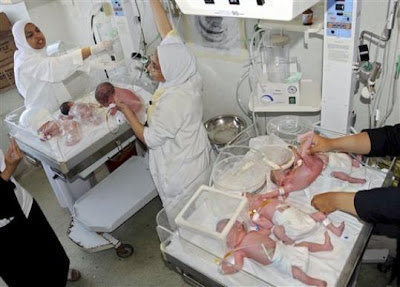 A 27-year-old Egyptian woman gave birth to septuplets early Saturday in the coastal city of Alexandria, family members and the hospital director said.

Ghazala Khamis was in good condition after having a blood transfusion during her Caesarean section due to bleeding, said Emad Darwish, director of the El-Shatbi Hospital where she gave birth.

The newborns, four boys and three girls, weigh between 3.2 pounds and 6.17 pounds and are in stable condition, Darwish said. They have been placed in incubators in four different hospitals that have special premature baby units, he said.

"This is a very rare pregnancy -- something I have never witnessed over my past 33 years in this profession," Darwish told The Associated Press by phone from the hospital.

Darwish decided to carry out the Caesarean section at the end of Khamis' eighth month of pregnancy due to the pressure on her kidneys. He said Khamis, who already has three daughters, took fertility drugs in an effort to have a son.

Khamis, the wife of a farmer in the northern Egyptian province of Beheira, was admitted to the hospital two months earlier, Darwish said.

"From the initial checkup, I say that none of the babies have any sort of deformities or incomplete organs," Darwish said.

The woman's brother, Khamis Khamis, said even though his sister was trying to conceive more children so she could have a son, the family was astonished when they found out she would give birth to multiple babies.

"We thought about an abortion, but then we felt it's religiously forbidden. So we said 'Let God's will prevail,'" he told the AP by phone.

Egypt's health minister announced that the seven babies will receive free milk and diapers for two years, the brother added.