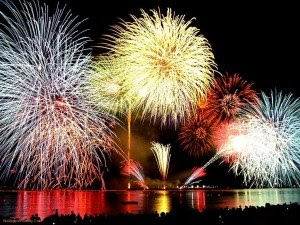 Fireworks : Fireworks, cheering, singing and noisemakers on New Year’s Eve are believed to scare away evil spirits. Do we really need an excuse to set off fireworks? Probably not. But we’ll take this opportunity to light the sky (and maybe the grass in our neighbor’s yard). Music and singing are a part of most celebrations and I’m pretty sure the 20 people doing a poor job of singing “Don’t Stop Believing” at 1AM aren’t concerned with keeping evil away in the new year. 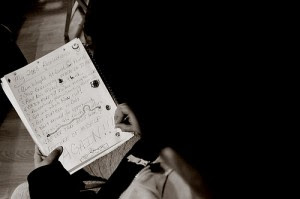 Making Resolutions : Many believe the first day of the New Year should be spent thinking about the past year and resolving to improve oneself in the coming year. And while the media recycles old stories about quitting smoking or getting out of debt and your parents use new year’s resolutions as a guilt-inducing tactic to get you to move out of their basement or pay back what you owe them not all resolutions have to be a life-altering ordeal. Resolve small in the New Year and you’ll feel good that you got something accomplished. 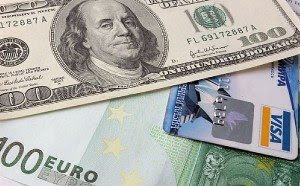 Paying Off Your Debt : It sounds like a resolution but you’re supposed to do this before January 1. This way you’re even when the new year arrives and you start with a fresh slate. On New Year’s Day you shouldn’t pay out anything or make loans because this signals money leaving you. So buy your lottery tickets on New Year’s Eve. 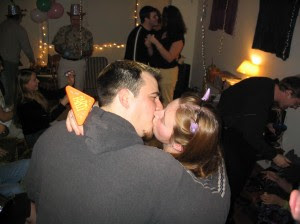 Kissing at Midnight : New Year’s Eve ranks second behind Valentine’s Day as the worst day to be single because when that clock strikes midnight everybody’s smooching but you. Granted, this is only painful for about 60 seconds (unlike Valentine’s Day which serves up a full 24 hours of candy hearts, barely clothed cupids and ridiculous romantic gestures). The New Year’s Eve kiss is a symbol that your affection and closeness will last all year. So don’t grab some weirdo and kiss them, find a friend and give ‘em a hug. 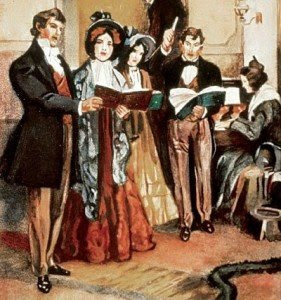 Singing “Auld Lang Syne” : A Scottish poem from the 1700’s; it literally means “old long since” or, in American, terms “days of long ago” or “the good old days.”

The song goes as such: 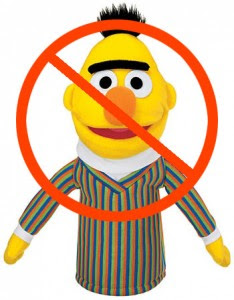 First Footer : The first person to visit your home on New Year’s Day has significance. It is considered good luck for a man to be the first person to cross your threshold (you have to let him in; he shouldn’t use a key to let himself in). It’s even better luck if he’s tall and good looking with dark hair. I’ve read specifically that the first footer should not have flat feet, crossed-eyes or a unibrow. So Frida Kahlo and Bert from Sesame Street should not be let in. Best of all, the first footer should bring along gifts like bread, fresh fruit, salt, and wine. If you’re a handsome man delivering wine on New Year’s Day, I’m guessing not many people are going to turn you away. 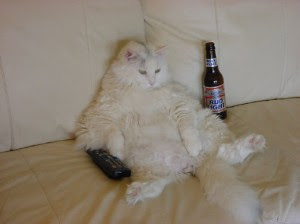 Lay Low & Do (Pretty Much) Nothing : A lot of info out there said not to do laundry or dishes (since you “wash away” luck and these can cause a death in the family in the coming year), not to take anything out of the house (including trash) and not to wash your hair. Sounds like the hang-over crowd was looking for a little justification to lie on the couch all day. 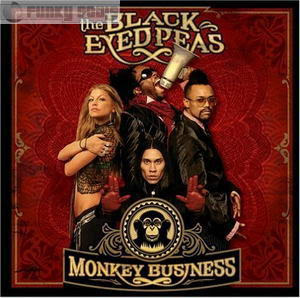 Eat, Eat! : While you are lazing about on the couch, make sure you are eating luck foods:
• Grapes – 12 of them, one for every month of the year
• Pork – because pigs root forward when they eat while chickens scratch backward (and bacon is delicious)
• Black eyed peas – here’s a good luck recipe that’s quite tasty and gets you your black-eyed peas and pork all in one meal
• Lentils – which resemble coins
• Greens such as collard greens, chard, cabbage and kale – the folds of the greens resemble money
Many of the foods that are “good” to eat resemble money or have to do with moving forward.

Nothing Should Leave the House : Here’s one that had to be thought up by someone who didn’t want to run errands. Nothing should be taken out of the house on New Year’s Day. If you’ve got things to give to others, return to stores, etc. put them in your car on New Year’s Eve because they shouldn’t leave the house on New Year’s Day. Some people allow items to leave the house after something has been brought in. The idea here is that something should be added to your house before anything is taken away. So if you’re a First Footer with a goodie basket, you best buy that stuff on your way over. 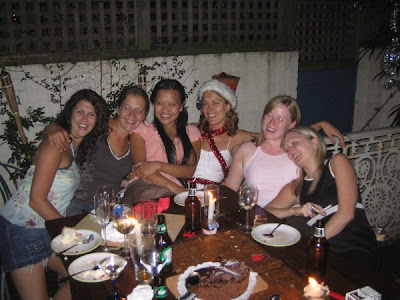 What You Do at New Years, You Will Do All Year : While most of these superstitions and traditions are meant to usher in good luck while keeping bad luck at bay, what you do can reflect how you’ll live in the coming year. Recovering from a big party the night before? Your year will likely include being surrounded by friends and good times. Motivating to work out on New Year’s Day? Well look who might just drop 10lbs in the new year. Cleaning and organizing around the house? Sounds like a year full of getting things done. Sleeping the day away? Maybe you won’t be getting too much done in the new year. Reading Top 10 lists? Sounds good to us. Happy New Year.

Visit 13above For More Fun
Posted by Editor John at Wednesday, December 31, 2008