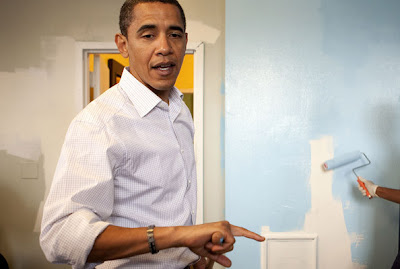 Just over a week into his new digs, and Barack Obama is already shaking things up in the White House. He's changing up the dress code and having a small shindig for Congressional machers. 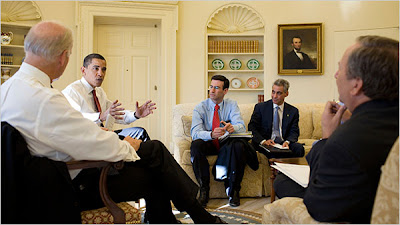 President Obama in a meeting last week in the Oval Office, where his predecessor required a coat and tie at all times.

He's ditched the jacket-and-tie-only rule for the Oval Office that his predecessor George W. Bush mandated , while also instituting a weekend business casual dress code for the White House staff. Time to open up that L.L. Bean catalog, Obama staffers, and pick out your perfect Saturday khakis.

Obama has also using the space to entertain a little. On Wednesday evening he held a cocktail gathering for some House and Senate movers and shakers of both parties he'll desperately need in the coming months was reportedly a success. According to Slate, he's part of a long tradition of presidents who gets things done by unhitching a notch or two in the evening hours :

" Harry Truman favored bourbon and branch water. (As vice president, Truman had just arrived to have a bourbon with House Speaker Sam Rayburn when he got the call that FDR had died.) When he was president, LBJ came to the Capitol on several occasions for an after-work drink with Senate Republican leader Everett Dirksen. [...] FDR won the presidency on a platform of ending Prohibition. Every evening, including during the war, Roosevelt mixed drinks in the Oval Office from behind his desk, before him a tray equipped with whatever he needed for the martinis or old fashioneds he was mixing. "

While it may be traditional, Obama is now taking some lumps for sipping libations while the economy burns. News that wagyu beef was served at the cocktail party has raced around the conservative blogosphere today, raising questions of why the president would serve something that can cost up to $100 per serving when hundred of thousands are losing their jobs. Typical is this comment from ThatSamIam at Michelle Malkin's blog :

" Anyone surprised? Of course they will spend big on everything. That’s what socialist progressive liberals do because they consider our money their money. "

If the Obama White House is going to be a more casual affair, could we suggest maybe something a bit more low-key for the next shindig? Some deviled eggs and one of the Safeway vegetable plates, perhaps.

Visit 13above For More Fun
Posted by Editor John at Thursday, January 29, 2009

Certainly not peanut butter and jelly.

I don't mind this at all what do people expect a Wal-mart white house? umm no thanks.