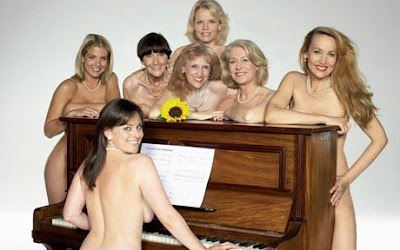 Hall, the 52-year-old model and actress, is pictured for the first time with the new line up for the stage show, basedon the true story of the Yorkshire-based Women's Institute members who posed nude for charity.
Hall, who stripped for the stage production of The Graduate in 2001, plays Miss September. She is seen wearingonly a set of pearls as she strategically stands behind a piano.
The glamorous new cast also includes Anita Dobson, 60, Jill Halfpenny, 33, Sara Crowe, 43, and GemmaAtkinson, 24, a former star of Hollyoaks, the teenage soap.
Richenda Carey, 61, and Jill Baker, 57, will also join the team when they perform at the end of July at the NoelCoward Theatre, London.
The grande dame of the cast is June Brown.Brown, 82, has played Dot Cotton in EastEnders since 1985, the year the show first aired.
Earlier this year she received a Bafta nomination for best actress, for an episode in which she appeared alone.
According to David Pugh, the producer, Brown is happy to be "a little more brave in the part".
He said: "Sian uses balls of wool and something that has been crocheted to cover her - so for June I'm thinkingsmaller balls of yarn and a slightly smaller piece of knitting."
The new cast will be with the show from 28 July to 17 October.
The producers donate the £1.50 booking fee, royalties and profits to leukaemia research, for which the realCalendar Girls raised funds.
When the original calendar came out in 1999, members of the Rylstone & District Women's Institute hoped togenerate enough money to buy a sofa for a hospital waiting room.
The original calendar features the women doing traditional WI activities such as gardening, baking, and needleworkin the nude.
Items including knitting, flowers and household objects are strategically placed to protect the group's modesty.
Their story became an award winning film in 2003 starring Dame Helen Mirren and Julie Walters before it becamea West end production by Tim Firth.
Earlier this year, six of the original 'calendar girls' reunited for a new 2010 calendar marking their 10th anniversary.
The calender has raised around £2 million for Leukaemia Research.