The Giant Anaconda To Generate Energy !!

The first wave power machine made of rubber, which resembles a giant swimming sea-snake, could be generating energy for 50,000 homes in the UK within five years, its developers said today. 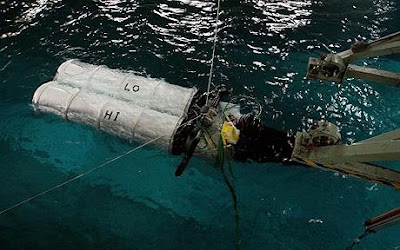 The Anaconda wave energy converter as it is tested at QinetiQ test tank in Gosport, Hampshire
The "Anaconda" is 200 metres long and made almost entirely of a rubber tube, making it much more resilient to surviving in the ocean. Each device is anchored to the ocean floor but moves with the waves, generating enough energy to power 1,000 homes.
The plan is to have "shoals" or "schools" of the devices around the coast, where they would be harnessed to "swim" just below the surface.
Groups of 50 anacondas could each generate enough electricity to power 50,000 homes for an "excitingly low" cost, the developers Checkmate Group said. Although it is difficult to put a figure on the cost at the moment the developers are confident it will be cheaper than a wind farm generating the equivalent amount of power and less controversial in terms of public protest since the devices will be below the sea. It is hoped the first anacondas will be deployed off the coast by 2014.
Paul Auston, chairman of Checkmate, said the anaconda could help to meet EU targets to source 15 per cent of all the UK's energy needs from renewables by 2020 - the lion's share of which is currently expected to be met by wind power.
He said: "I think wave power has always been as the poor relation of wind energy, but a lot of people are resentful of wind turbines on their doorstep, or in vast tracts of coastal waters.
"What we're offering through Checkmate is a new technology which you can't see, it's under the water so it's not as intrusive and it's made of a natural material."
Visit 13above For More Fun
Posted by Editor John at Tuesday, May 05, 2009

I bet you wont be able to beat me... This is a fun little time killer...