China formally kicked off mass celebrations of 60 years of communist rule on Thursday with a 60-gun salute that rung out across Beijing's historic Tienanmen Square.

The National Day marks the start of one of the two Golden Weeks in the PRC. However, there have been some recent controversies over whether Golden Weeks should be kept.

China will glorify the nation's six-decade revival as a global power with a tightly choreographed display of mass patriotism including a military parade and spectacular pageant depicting the Communist Party-led rebirth. 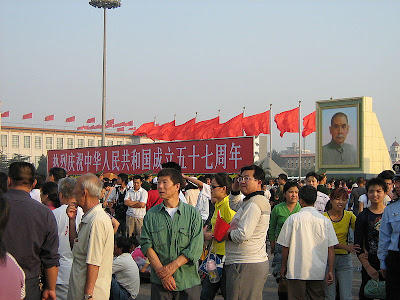 The National Day is celebrated throughout mainland China, Hong Kong, and Macau with a variety of government-organized festivities, including fireworks and concerts. Public places, such as Tienanmen Square in Beijing, are decorated in a festive theme. Portraits of revered leaders, such as Sun Yat-sen, are publicly displayed.

President Hu Jintao, who reviewed troops from an open limousine, was to deliver a speech at the historic square to an invitation-only audience of spectators and foreign dignitaries, with security air-tight across the city.

China typically holds grand celebrations every 10 years to commemorate revolutionary leader Mao Zedong's proclamation of the founding of the People's Republic of China on October 1, 1949.

But this year's festivities promise to top those staged in the past, with estimates of 200,000 people taking part in an extravaganza that officials say will outdo even last year's lavish opening ceremony for the Beijing Olympics.

The authorities want to send a clear message: that China has re-emerged as an undeniable force in the world.

Underlining this confidence, Premier Wen Jiabao predicted further Chinese greatness in a speech to a 60th anniversary reception on the eve of the gala.

"In another 40 years, the 100th anniversary of our nation's founding will come. At that time, a prosperous, powerful, democratic, civilized, harmonious and advanced socialist nation will tower over the East," he said Wednesday.

China will add teeth to those projections with a parade expected to feature nuclear missiles and other high-tech, Chinese-developed weaponry meant to convey the message that a nation once bullied by foreign powers is a pushover no more.

But the apparent insecurity of the ruling Communists has been just as clearly on display -- authorities have imposed draconian security in a seeming bid to prevent an array of perceived threats from spoiling the party.

These include seething tensions in ethnic minority regions such as Xinjiang and Tibet, and widespread social discontent over a widening wealth gap, official corruption and horrific environmental degradation.

As a result, Beijing's 17 million citizens will be relegated to watching the festivities in their
hometown on television like the rest of the nation.

Lu Haishi, 23, traveled all the way from Shanghai to watch the festivities with friends -- on TV.

"I came to Beijing for the National Day from Shanghai for the atmosphere. We've rented a room to see the parade on television in a hotel near the route, to get the atmosphere," he said.

Police have for weeks been checking traffic entering the capital, residents along the parade route were ordered not to open their windows during the event, and even the city's airport will shut for the parade's three-hour duration.

Beggars and the homeless have been cleared out and knife sales temporarily banned in some stores after two recent stabbings near Tiananmen Square, while even the flying of pigeons and kites has been ruled out.

The Mao-led 1949 communist takeover ended years of foreign domination and war, while three decades of economic reforms initiated by late leader Deng Xiaoping enriched China and propelled it back into the ranks of world powers. 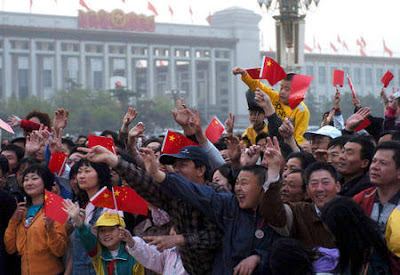 On October 1st in 1949 the Chinese people, under the leadership of Communist Party of China, declared victory in War of Liberation against the Nationalist forces of Chiang Kai Shek. The grand ceremony for the founding of People's Republic of China was held on this day in Tiananmen Square in Beijing. Mao Zedong, Chairman of the Central People's Government, solemnly declared the founding of P.R.C. at the ceremony and raised the first national flag of China himself. 300,000 soldiers and people gathered on the square for the grand parade and procession.

When the anniversary is a multiple of five (e.g. the 50th, 55th, or 60th), large-scale official celebrations may be held, including an inspection of troops on Tiananmen Square. More notable of these events included Deng Xiaoping's inspection in 1984 and Jiang Zemin's inspection in 1999 and Hu Jintao's inspection in 2009.

In past times, the day was marked by large political gatherings and speeches, military parades, state banquets and the like. Since 2000, as China's economy developed, the national holiday lasts seven days and most workers are given time off to visit relatives and take time for traveling. 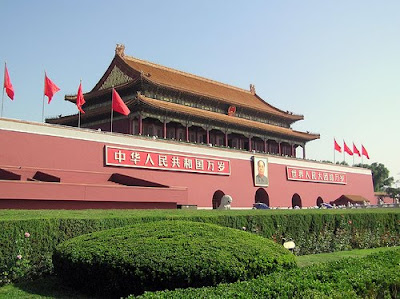 The Flower Bed in Tiananmen Square:

The National Day Flower Bed festival is found in the main squares of many cities during National Day. The Flower Bed in Tiananmen Square is of course the grandest and most beautiful. The highlight of the Tiananmen Square Flower Bed this National Day is a 9.9meter-high palace lantern. It is the highest palace Lantern in Beijing. It is made of delicately carved high quality wood. It is decorated with Chinese paintings of peony as well as the Great Wall and topped with life-like dragons' heads. 200,000 potted flowers are used to form the flower bed and sure to fill Beijing with festive ambiance. 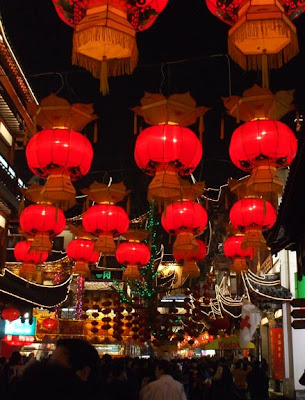 During China's National Day, red lanterns are seen everywhere, especially hanging at the gates of government office buildings as well as all kinds of stores and shops. The red lantern is a symbol of festivity, luck and happiness. 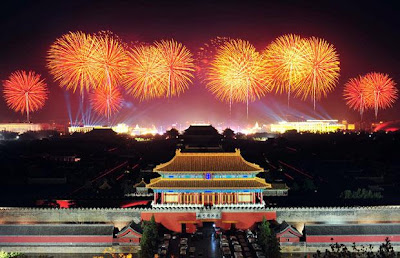 Fireworks displays are usually held nationwide in all cities during China's National Day, one of the grandest and most famous being The Hong Kong National Day Fireworks Display held since 1997 in Victoria Harbor.

The 2008 Hong Kong National Day Fireworks Display is to kick off at nine o'clock October 1st in Victorian Harbor. There will be 23,000 fireworks exploding above the sky of Victorian Harbor and over 100,000 people getting together to celebrate the 59th birthday of the People's Republic of China.
Posted by Editor John at Wednesday, September 30, 2009