It took Facebook five years to get to 150 million active users, a lightning-fast growth rate by any measure. But like track phenom Usain Bolt, the world's No. 1 social networking website atomized its own speed record this year by going from 150 million users to 300 million users in a little over nine months.

Facebook today announced cracking 300 million users worldwide and becoming "cash-flow positive." The world's largest social network had set a goal of being cash-flow positive sometime in 2010. "I'm pleased to share that we achieved this milestone last quarter. This is important to us because it sets Facebook up to be a strong independent service for the long term," wrote Facebook co-founder and CEO Mark Zuckerberg in a blog post.

CEO Mark Zuckerberg also said today that the company had become cash-flow positive ahead of
schedule (he had originally guessed "sometime in 2010") and called the milestone important "because it sets Facebook up to be a strong independent service for the long term." 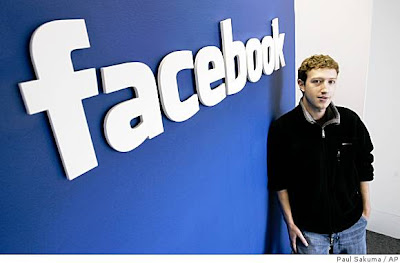 We're also succeeding at building Facebook in a sustainable way. Earlier this year, we said we expected to be cash flow positive sometime in 2010, and I'm pleased to share that we achieved this milestone last quarter. This is important to us because it sets Facebook up to be a strong independent service for the long term.-Said Zuckerberg

He also said Facebook is in the black as of the last fiscal quarter:Good for them. Too bad for
anyone who was hoping for an IPO.

The site continues to expand its audience at a torrid pace, adding 50 million users just since July
and doubling in size since the start of 2009. About 70% of its users are outside the U.S.

CEO Mr.Zuckerberg said in an interview with Bloomberg last month that Facebook hoped to increase its work force by 50 percent by the end of the year, but stressed that "the thing I want to remind people of is we're way closer to the beginning than the end."
Posted by Editor John at Tuesday, September 15, 2009