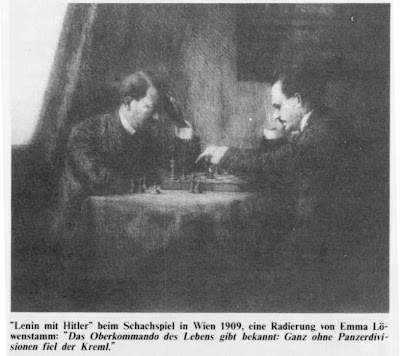 The extraordinary etching is said to have been created in Vienna by Hitler's art teacher, Emma
Lowenstramm.

It is apparently signed on the reverse by the two dictators.

In 1909, Hitler was a jobbing artist in the city and Lenin was in exile and the house where they
allegedly played the game belonged to a prominent Jewish family, reports The Telegraph.

In the run-up to the Second World War the Jewish family fled.

And they gave the image and chess set to their housekeeper, whose great-great grandson could now net 40,000 pounds for each item at an auction in Shropshire next month.

The unnamed vendor is confident the items are genuine after his father spent a lifetime attempting to prove their authenticity.

Richard Westwood-Brookes, who is selling the items, said: "This just sounds too good to be true,
but the vendor's father spent a lifetime proving it.

"He compiled a 300 page document and spent a great deal of money engaging experts to examine the etching. The signatures in pencil on the reverse are said to have an 80 per cent chance of being genuine, and there is proof that Emma Lowenstramm did exist.

"The circumstantial evidence is very good on top of the paper having been tested. Hitler was a
painter in 1909 and his Jewish teacher Emma Lowenstramm was the person who made the etching.

"There is some suggestion that when he came to power Hitler protected her and she died from
natural causes in 1941. At the time, Vienna was a hotbed of political intrigue and the house where this game took place belonged to a prominent Jewish family.

"Lenin at the time was moving around Europe in exile and writing "Materialism and
Empirio-criticism."

Westwood-Brookes added: "His movements are hazy and it is known that he did play chess and later he certainly wore wigs as a disguise. It is also known that Lenin was a German agent and the house was where people went to exchange political views.

"The chess set is clearly the same chess set as that in the etching. It is a box chess set that
folds out and the pieces are identifiable - particularly the kings and bishops. To my knowledge
there are five etchings of this image, but this has the signatures of both men and the artist.

"On all sorts of levels it is an extremely valuable artefact. Even as just an allegorical picture
it shows the men playing chess possibly for the world."

Historian Helen Rappaport, who has just written a book called "Conspirator: Lenin in Exile", said
the etching was probably a "glorious piece of fantasy".

She said: "In 1909 Lenin was in France and there is no evidence that he was in Vienna. In October he went to Liege in Belgium and in November he went to Brussels. He would have visited Vienna before and after that year.

"He liked the place and went there because he travelled around Europe on trains, but he wouldn't have been there long enough to meet a young Hitler. He was also as bald as a bat by 1894 with just hair on the sides of his head.

"And when in exile he was not known as Lenin and instead used a number of aliases. The person
believed to be Lenin in the etching may well have been one of his revolutionary or Bolshevik

associates who was misidentified. It may even have been an Austrian socialist with whom he
associated in the Second International.

"The Germans did fund the Bolsheviks and gave them millions of marks for the revolutionary effort, but Lenin was not a German sympathiser. Although this is totally spurious it is wonderful to bring these two great megalomaniacs together.

The items are to be sold at Mullock's auction house in Ludlow, Shropshire, on October 1.