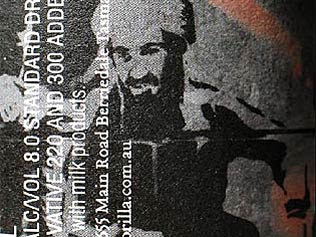 Another label reproduces an image that surfaced from the torture scandal at Abu Ghraib prison in Iraq, of a hooded prisoner with electric wires attached to his hands.

The wines are being produced by the Moorilla winery, owned by millionaire gambler David Walsh, in Hobart's northern suburbs.

The images are taken from political graffiti from the streets of Hobart and Melbourne.

The stencil image of bin Laden goes next to a graffiti message reading "all you need is love".

Beneath the torture image are the words "Iraqi liberation".

"It's not a question of us trying to confront people," Mr van der Reest said. "It's more a chronicling of stuff that's current, either in art or world events."

Visit 13above For More Fun
Posted by Editor John at Friday, February 06, 2009