Feel The Breath Of Dinosaurs AGAIN !!

Feel the breath of a huge brachiosaurus. Hear the terrifying roar of a 40ft T-Rex. A new £10m show really does let you walk with dinosaurs – and it promises to be a monster hit..
The noise hits you first – a bellowing, bone-shaking roar that leaves your heart pounding and your adrenaline levels soaring. 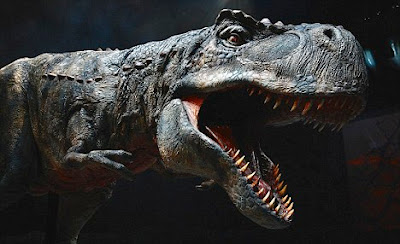 Then you see it, a 42ft Tyrannosaurus rex towering over you, nostrils flaring, beady eye glaring. If you've ever wondered what it would have been like to get up close to a dinosaur, then this, without a doubt, is it. 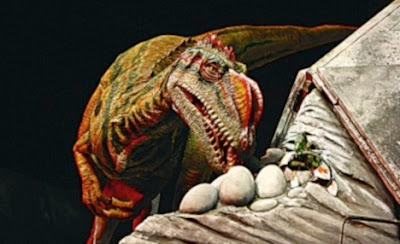 Life as they knew it: The Walking With Dinosaurs show will re-create how the creatures lived.

Ten years after the BBC's award-winning Walking With Dinosaurs series became the most expensive documentary ever made, it has been transformed into a ground-breaking, live animatronics show.

Now, 65 million years after they died out, audiences will be able to transport themselves back in time and stand side-by-side with some of the most terrifying animals ever to have existed on our planet.

The experience is not for the faint-hearted. Those who go to see Walking With Dinosaurs, The Arena Spectacular, which is due to arrive in the UK this summer, will find themselves penned in with 15 life-sized and disturbingly realistic dinosaur models. 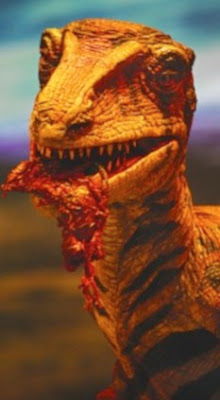 Alarmingly lifelike: The models can even chew.

When the brachiosaurus stomps into view – 72ft from nose to tail and 32ft tall – suddenly it's possible to appreciate the colossal size of these beasts. And when the snarling T-Rex launches itself at a predatory torosaurus, you could be forgiven for wondering if you'd somehow strayed onto the set of Jurassic Park IV.

This, say the show's producers, is the closest anyone has ever got to experiencing what life would have been like when the dinosaurs ruled the Earth 200 million years ago.
Recreating the experience hasn't been cheap. Costing £10 million to produce, it has taken a team of 50 people – including engineers, puppet makers, artists and animatronics experts – a year to create. A team of paleontologists gave advice on how the dinosaurs would have moved, and even how they would have roared.

'We take the audience on a journey back in time and show them how the dinosaurs might have looked in their prime – and how they fought for survival every day of their lives,' says the show's director, Cameron Wenn.

'Our dinosaurs move as if they're real – with all the roars, snorts and excitement that goes with it.'

Without the possibility of using computer graphics, the realistic effects are achieved through animatronics and puppetry. Sonny Tilders, the man responsible for designing and building the dinosaurs, is a world authority on animatronics and honed his skills on films such as The Chronicles Of Narnia.

'Many of the technologies are borrowed from feature films,he says. 'We use "muscle bags" made from stretch mesh fabric and filled with polystyrene balls to make it appear that these creatures are flesh and blood weighing six, eight or even 20 tons. The bags contract and stretch in the same manner that muscle, fat, and skin do on real creatures, giving a really life-like appearance.'

Add to this the scaly skin on each model, the orange-flecked eyes that swivel and blink and jaws that actually chew, and you find yourself faced with something that looks alarmingly real. 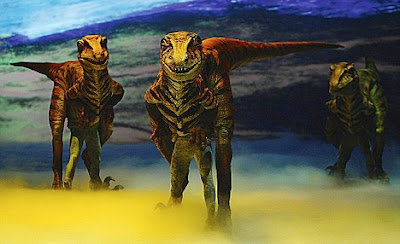 Costing £10 million to produce, it has taken a team of 50 people - including engineers, puppet makers, artists and animatronics experts - a year to create. 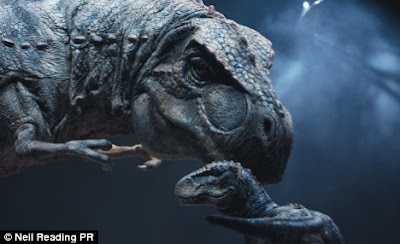 Roaring into action: In one scene, a T Rex fights to protect her young.

Dinosaurs featured include the stegosaurus, with its distinctive double row of plates along its arched back; the giant, flying ornithocherius, which soars above the stadium,'its wings almost as wide as the stage; and the fierce, evil-looking utahraptor, with its long, sharp claws.

A driver lies between each dinosaur's legs, disguised in a low, flat box that looks like a rock, and is responsible for manoeuvring the beast around the arena.

He works in tandem with two 'voodoo puppeteers', so-called because they sit at the back of the arena, hundreds of feet from the stage, with scaled-down versions of the dinosaurs. The actions they perform with these replicas are interpreted by computer and sent by radio waves to make the giant dinosaurs reproduce the action.

And, like the stars of any show, the dinosaurs have their diva-esque moments. 'They don't like to work for too long at a time – they overheat,' says Wenn. 'And they get twitchy if we're too near a police station, or anywhere there is a clash of radio frequencies.

The show has already gone down a storm in Australia and the US. Newsweek magazine proclaimed it as 'that rare entertainment beast that parents and kids can enjoy together'.

A safari-suited palaeontologist guides the audience through the tale of the Earth's development, accompanied by rousing music.

With each landscape change comes a terrifying new addition to the dinosaur family – each one seemingly larger and fiercer than the last. Volcanos erupt, flowers sprout and then die, and carnivorous dinosaurs evolve to walk on two legs so they can run faster from predators and attack their prey with increased speed.

And in the end, this strange and wonderful era of the planet's history comes to an explosive end when a massive comet hits Earth and wipes all the dinosaurs out.

Walking With Dinosaurs live show coincides with the 150th anniversary of the publication of On The Origin Of Species – although exactly what Charles Darwin would have made of its stomping, roaring, hi-tech portrayal of evolution and extinction is anyone's guess.