THREE-YEAR-OLD Mehul Kumar is lucky to be alive after being speared through the torso with a 3-foot (1 metre) iron rod.

The boy, from Jharkand, India, was rushed to the hospital after he impaled himself falling off a terrace and onto a rod last week. 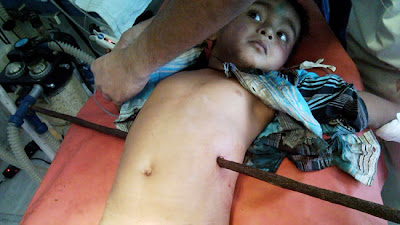 The boy was fully conscious when he arrived at the hospital. Doctors removed the rod during a 4-hour operation and said he had lost a lot of blood and suffered some injuries, but "nothing major."

"Opening the abdomen, we discovered his liver was injured, the stomach was injured, but thankfully, the spleen and pancreas were safe," said surgeon Sandeep Aggarwal said. "The child was lucky that he did not suffer any major injury but yes he had substantial injuries."

Mehul was playing with colours on the terrace when he fell on an iron rod left standing on the under-construction terrace, his uncle Raja Kumar Viswakarma, said. The rod pierced through his body and then broke, resulting in his fall from the roof.

In July last year, Supratim Dutta had similarly been impaled by a 5-foot long (1.5 metre) iron bar that had pierced through his chest in New Delhi. Supratim was saved by the doctors of All India Institute of Medical Sciences.

all the wild n wackys are really fantastic
viswanathan