With over half a million jobs lost in India alone in recent months, the World Bank predicts the global economy and global trade would both shrink this year for the first time since World War II.

While the global economy is likely to grow at least 5 percentage points below potential in 2009, world trade is on track to record its largest decline in 80 years - with the sharpest losses in East Asia.

World Bank forecasts show that global industrial production by the middle of 2009 could be as much as 15 percent lower than levels in 2008, it said in a paper for next Saturday's meeting of the Group of 20 finance ministers and central bank governors. 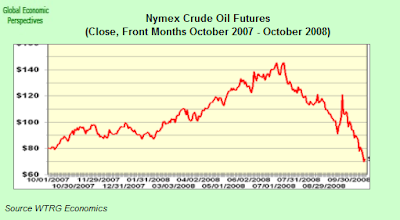 Developing countries face a financing shortfall of $270-700 billion this year, as private sector creditors shun emerging markets, and only one quarter of the most vulnerable countries have the resources to prevent a rise in poverty.

The paper said that 94 out of 116 developing countries have experienced a slowdown in economic growth. Of these countries, 43 have high levels of poverty.

To date, the most affected sectors are those that were the most dynamic, typically urban-based exporters, construction, mining, and manufacturing.

For example, 'more than half a million jobs have been lost in the last three months of 2008 in India, including in gems and jewellery, autos and textiles,' the paper noted.

Many of the world's poorest countries are becoming ever more dependent on development assistance as their exports and fiscal revenues decline because of the crisis.

Noting that donors are already behind by around $39 billion on their commitments to increase aid made at the Gleneagles Summit in 2005, the bank said: 'the concern now is that aid flows will become more volatile as some countries cut their aid budgets while others reaffirm aid commitments, at least for this year.'

The World Bank said that international financial institutions cannot by themselves currently cover the shortfall-that includes public and private debt and trade deficits-for these 129 countries, even at the lower end of the range.

A solution will require governments, multilateral institutions, and the private sector. Only one quarter of vulnerable developing countries have the ability to finance measures to blunt the economic downturn, such as job-creation or safety net programs.

'We need to react in real time to a growing crisis that is hurting people in developing countries,' said World Bank Group President Robert B. Zoellick.

'This global crisis needs a global solution and preventing an economic catastrophe in developing countries is important for global efforts to overcome this crisis.