How To Earn Manifold On Your Savings

But you can earn as much as 2 per cent (2.5 per cent) in some top-paying accounts used by banks to tempt in savers.

Now is the perfect time to switch, even if you are in an account that demands you give notice to get at your money. With interest rates this low, you will lose only a few pennies' interest if you move immediately without giving notice - and you can make that back in a couple of weeks.

David Black, from financial researcher Defaqto.com, says: 'If you have been in an easy access variablerate account for more than six months then check your rate. Best buy tables are full of newly launched accounts and those boosted by an introductory bonus.'

But these figures only include accounts open to new savers. There are hundreds more among accounts closed to new savers where your money might have been languishing for years. 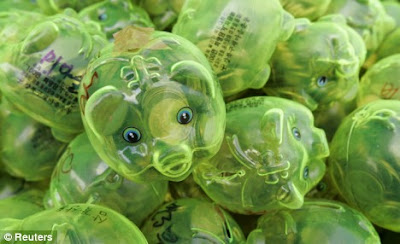 Switch and save: Banks are tempting customers to switch accounts

These appalling rates have come to light after banks and building societies adjusted the interest they pay to savers following the 0.5 percentage point cut in base rate to 0.5 per cent on March 5.

They tend to wait until the start of the following month after a base rate change to make adjustments to their savings rates.

Notice accounts, such as Halifax 60 Day Gold, typically demand that you give 60 days' notice to take out money or pay a fine equivalent to 60 days' interest.

You could also be earning appalling rates on tax-free cash Isas. Older versions of Alliance & Leicester Direct Isa pay just 0.1per cent, as does Abbey Postal Isa and Easy Isa to some savers and RBS Instant 60 Day Isa.

Both Halifax Isa Saver and Barclays Cash Isa pay 0.1per cent on balances up to £18,000.

A £10,000 sum earns you £10 interest a year against £300 in a top-paying account. And don't be fooled into thinking you earn a good rate on your internet account. Old Alliance Online Saver and Lloyds TSB Online Saver accounts, along with Abbey eSaver and Barclays e-savings, pay 0.08 per cent (0.1 per cent) once your introductory bonus has run out.