Mother Nature's animal factory regularly cranks out sophisticated living machines designed to function in fascinating ways. So it's no surprise that researchers look to nature for inspiration when designing robots.
The resulting machines that blend biology with computer science are called biomimetic robots. And it's not just their uncanny resemblance to living creatures that makes them special. These bots are designed to fly, swim, climb, crawl and walk into places that humans can't. Here are 10 of our most favorites ... tell me what's you view ? 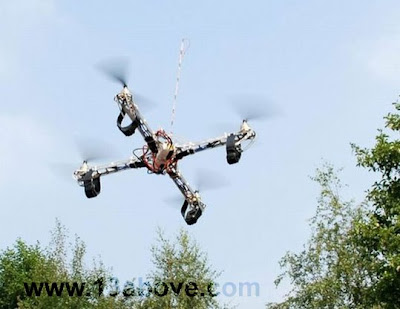 1. We Have Liftoff!
Meet Carlton, an aerial scouting robot developed to support rescue and security teams. Inspired by the flying motion of flies and bees, Carlton can maintain speed and still move in the opposite direction. Imaging sensors are able produce photos of whatever surface it flies over. These photos can be used, for example, to assess the territory on the other side of a tree line before sending in real humans. Bzzz. 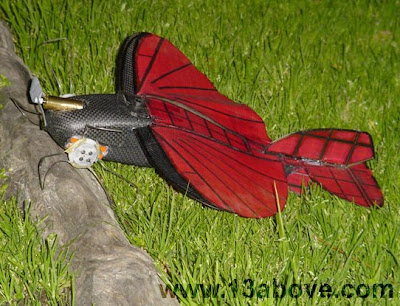 2. Flying Spies
It may look like an adorable butterfly toy, but the Morphing Micro Air and Land Vehicle is a serious device.
An air/land hybrid robot, the vehicle can fly into hostile areas, land, walk around and gather and send intelligence back to its controller. The controller can then assess how dangerous the situation is without having to physically send people in to do the data collection. 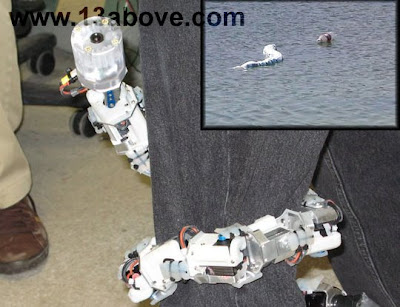 3. Slithering Segments
This modular snake robot, dubbed "Modsnake," climbs, side-winds and swims by moving its segmented frame and joints just like a snake constricts and contracts its muscles.
Shown here in the lab and then in action, Modsnake can slip through pipes, chain link fences, rocky areas and water easily with its waterproof skin and wireless remote controls. Here's how it works: Sine waves are sent through the robot's body, propelling it either forwards or backwards. Linear progression of these movements can bend or turn it. 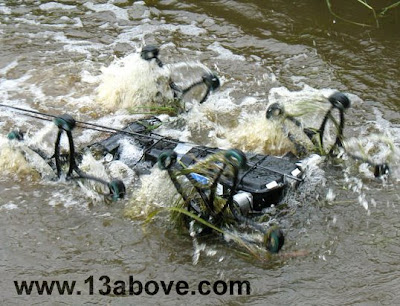 4. All-Terrian Vehicle
Inspired by four-legged animals, Asguard is a surveillance robot that can walk over multiple kinds of terrain and swim in water, much like how dogs and horses can. It can move indoors and out, and be sent to crawl around disaster areas to assess the conditions. 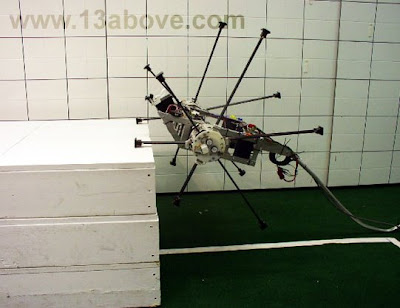 5. Big Wheel
There's no passing IMPASS. With it's novel spoke-wheel mechanism, the Intelligent Mobility Platform with Active Spoke System, or IMPASS, can climb multiple steps at a time or explore deep holes with its long, protruding legs. The robot's rimless wheels and spokes that shorten or lengthen individually allows IMPASS to propel itself forward. Each foot at the end of its legs is equipped with a terrain sensor so the robot can assess its surroundings and maintain balance while recording the ground's stability.
The Robotics & Mechanisms Lab (RoMeLa) at Virginia Tech believe IMPASS could be useful in search-and-rescue missions, anti-terrorist operations and scientific exploration. 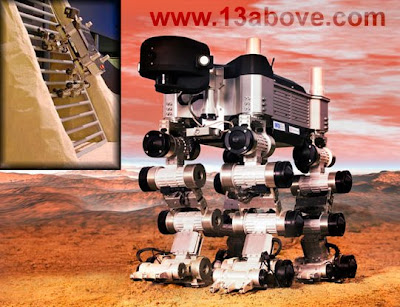 6. The Rock Climber
This four-legged robot can leap into action at a moment's notice, scaling walls (or stairs in this case) like a goat would scale a mountainside. Called ARAMIES, for Ambulating Robot for Autonomous Martian Investigation, Exploration and Science, the robot is part of the space robot series at the University of Bremen and was developed for exploring canyons and crater walls on Mars and the moon.
Each one of its 26 active joints -- six in each leg and two in its head -- is equipped with position sensors, electrical current sensors and temperature sensors for analyzing extreme environments. It also features an extending claw that can help it rock climb walls up to a 70-degree incline.
Although Scorpion is in its third year of development at the University of Bremen, a copy of the robot is being tested at the NASA Ames Research Center to study if there are advantages for using legged systems in future missions. 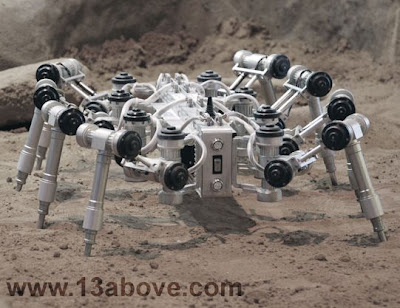 7. Hey, I'm Flexible
Don't be afraid of getting stung, Scorpion is here to help. This eight-legged, walking robot  imitates the movements of the arthropod from which it gets its name.
Controlled through voice commands and a data glove, this insect-looking robot has very flexible legs and a biological motor system to allow quick, smooth movement over all kinds of terrain, from hazardous to planetary. Its creators hope Scorpion can be used as an assistant to other robots for gathering photos and other data on space missions. 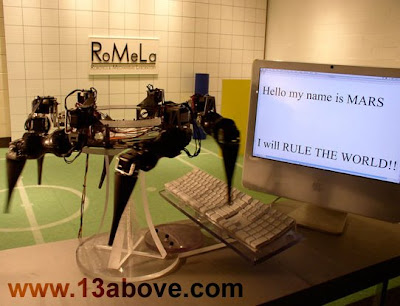 8. Double Jointed
Another creepy, crawly insect-looking robot is the Multi-Appendaged Robotic System, or MARS, which moves very much like a spider racing along the ground. Its six-legged walking algorithm allows the robot to simultaneously change its direction, speed, height and orientation -- quickly adapting to uneven terrain.
In lifting its "knees,” MARS' limb configurations with individually controlled joints also allow it to adjust its gait to counter any "foot sinkage" on soft ground. It can even send emails! 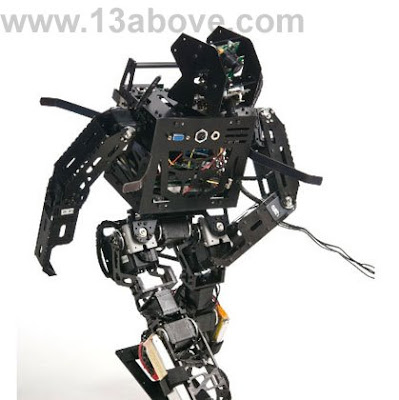 9. Man On!
Meet our future fellow man : DARwIn
The Dynamic Anthropomorphic Robot with Intelligence imitates a multitude of human function, including vision processing, reaction, standing up, cooperating and coordinating with other robots (playing nicely with others) and, most importantly, walking and running successfully. It's used to study two-legged robot locomotion.
Built with sensors in every joint and limb, a brain-like computer and cameras, this battery-powered robot can actually identify and process objects.
DARwIn also scored big in this past summer's International RoboCup at the only American-built robot to challenge. RoboCup is a worldwide competition for robotics labs to build humaniod robot soccer players and have them go head-to-head in heated matches. Their hope is to create a robot time by 2050 that can beat real human soccer players. 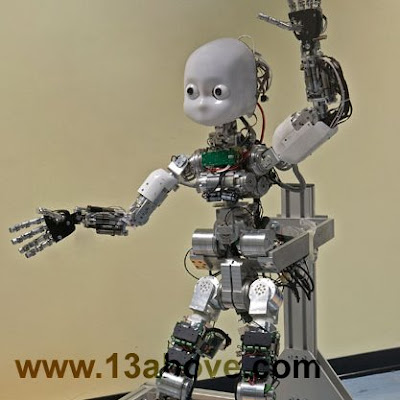 10. Crawling Towards the Future
Toddlers can be difficult study subjects. They communicate and process the world differently than children and adults so it can be a real challenge to learn more about the way their body functions. What's the solution?
The EPFL (Swiss Federal Institute of Technology) in Lausanne Switzerland has a student team working on a robot that has the size and appearance of a three-and-a-half-year-old child. Named iCub, the robot is a joint project between 15 different partners across Europe, including EPFL, to study how infants learn to crawl and manipulate objects, without the late-night feedings and crying.
The computerized brain of this baby bot was built from research gathered on the cognitive function of real infants. The iCub brain can think about several actions, choose one, act on it and then reflect on that action.
Source : discover.com
Visit 13above For More Fun
Posted by Editor John at Wednesday, April 22, 2009