Maddeningly bizarre, "cast in stone" - so people will have to live with it!
We have to say right away: we love these wicked additions to urban landscape - the weirder the better, less boring gray expanses and zombie-spawning parking lots! But we have to ask ourselves, what sort of oxygen these artists were inhaling, and what sort of psychedelic lunch they were eating before going on with something like this (see more than 30 examples below, some maybe slightly nsfw!).
We number each sculpture, and let you vote in the comments which one is the most unforgettable, disturbing and bizarre! As for me, I am going to erect a metal scarecrow on the roof of my building to scare off police helicopters, or build a nutty shrine for squirrels in my backyard, all the while fighting off local zombing...er, "zoning" by-law enforcers.
Should we start with the SuperLambBanana? Sure! - 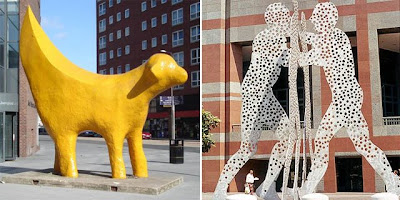 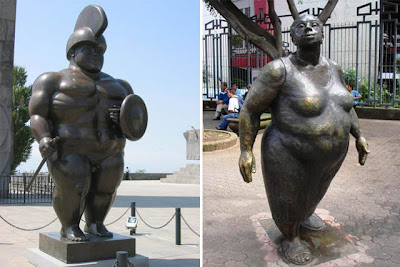 7. Disabled statue on Trafalgar Square in London
8. Finger sculpture, similar to "Le Pouce" one, in France

9. City of Wilmington's tribute to the 1898 Wilmington Race Riot
10. "The Angel of the North" in Gateshead, England 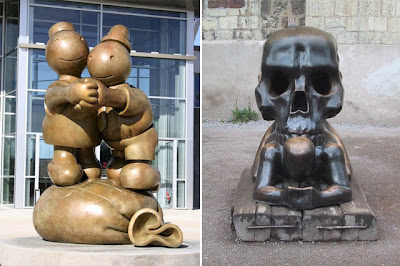 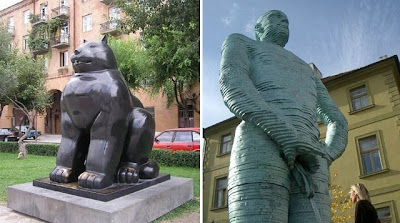 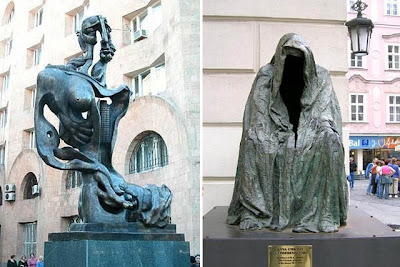 15. Armenia, Erevan
16. Nazgul is spotted in Prague, the same one sits in Salzburg, Austria 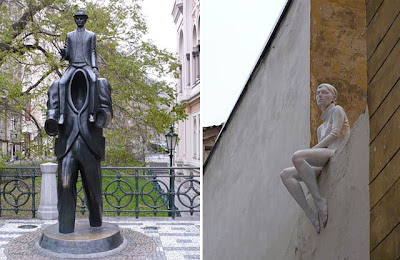 23. A guy and a horse melting into a blob - but rather, this is Baron Münchhausen, pulling himself up;
24. Watering problem solved, Wateringen, Holland 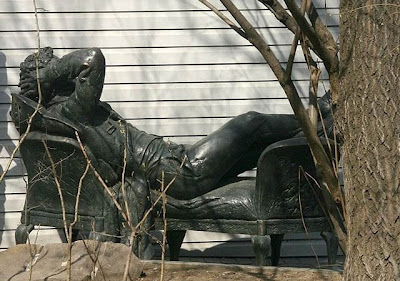 25. Resting from trouble, in Moscow 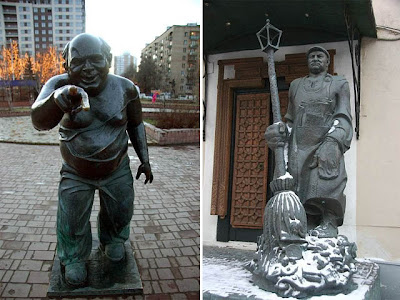 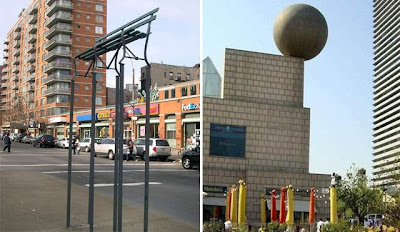 28. Try to sit on this bench (street art by Brad Downey)
29. ...in the meantime something big and round is getting ready to fall; Barcelona, Spain 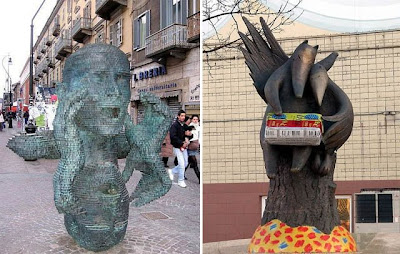 30. Turin, Italy
31. Illustration to the "Fox and Crow" fable by Krylov 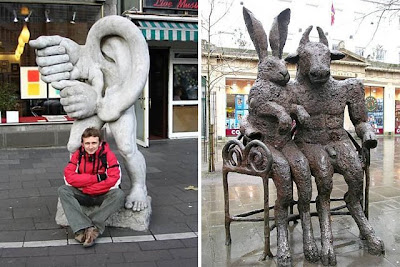 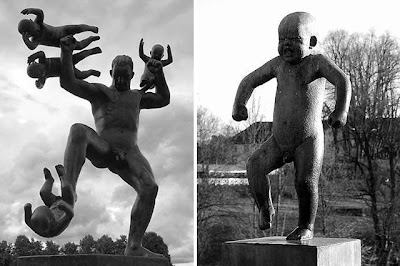 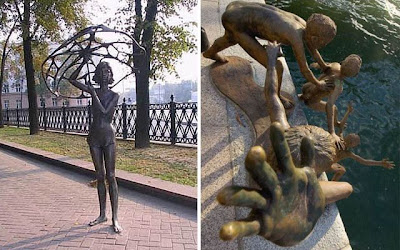 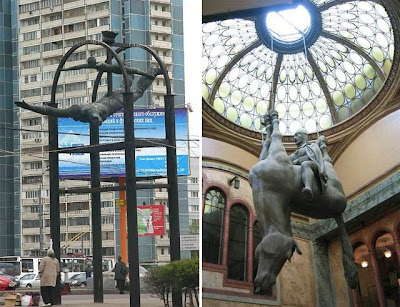 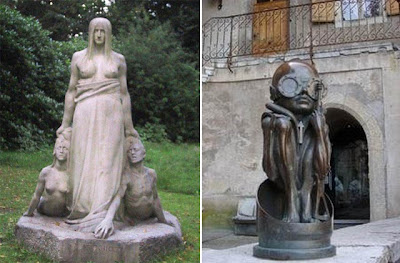 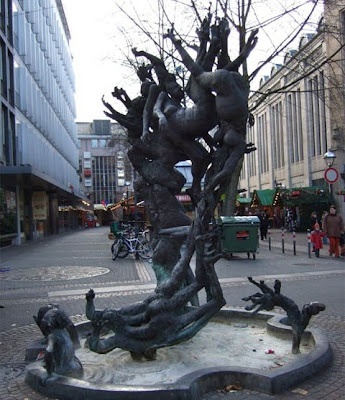 46. Bicycle in concrete, in Sarajevo.
47. FDR Memorial in Washington, DC 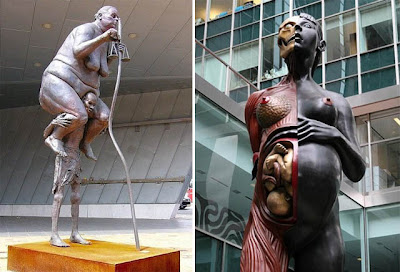 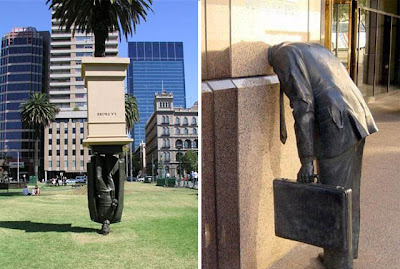 50. These ones are classics... Melbourne, Australia
51. Los Angeles, California 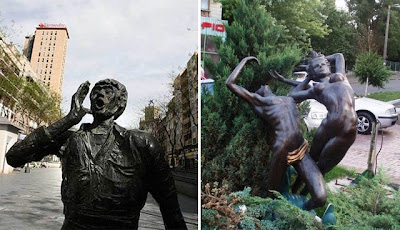 52. These are probably less known: "Cry in the Wilderness" in Minsk
53. and playful sculptures, unknown location 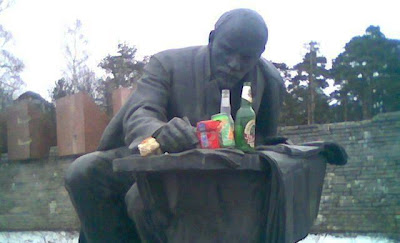 54. Lenin having a break from politics 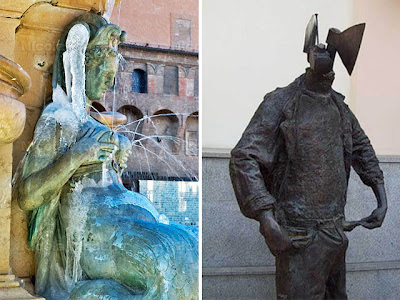 55. Mermaid milking herself, Bologna, Italy
56. and a guy, not really having a brain, looks like... 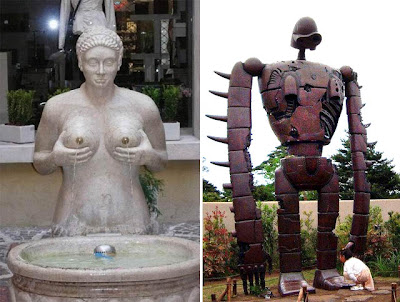 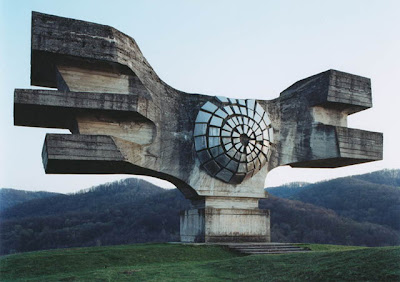 57 . This is an entirely different kind of street art (Germany), simply brilliant !! 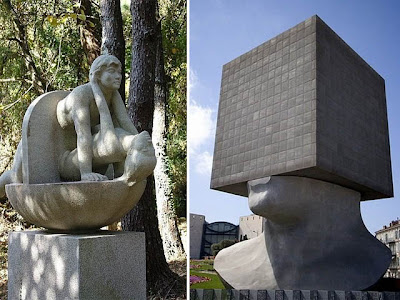 58. Some metamorphosis, unknown
59. Square head in meditation, in Nice, France 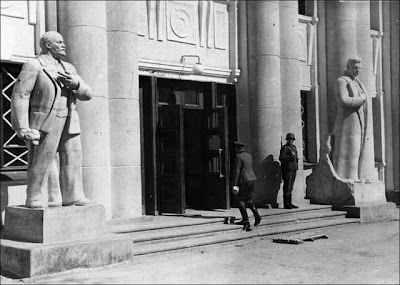 This is only a first part of projected (truly monumental) series, so send us tips and images of whatever sculptural weirdness you spotted in public places !
Visit 13above For More Fun

These would be my 3:
7. Disabled statue on Trafalgar Square in London
49. Anatomy lesson in Manhattan
55. Mermaid milking herself, Bologna, Italy