It is the most widely anticipated appointment of Barack Obama’s new administration and today, after months of fevered speculation, the White House welcomed the new First Dog.

With one hand round his youngest daughter Sasha, the President used his other hand to pet Bo, a six-month-old Portuguese Water Dog, as the First Lady Michelle and their other daughter Malia looked on.

The lucky canine is a gift from Senator Edward Kennedy and his wife Victoria to the President's daughters.

The dog was bred at the kennels in Texas and sold to someone who returned it. 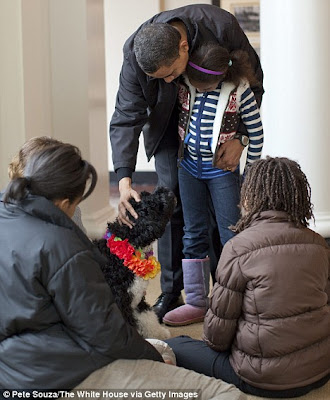 A source said: ‘The dog is six months old, a boy and a mass of black curls. His former owner decided they couldn’t cope with such a boisterous animal. He was originally called Charlie.’

Ever since Mr Obama announced on election night last November that he would be buying his daughters a dog, America has been obsessed by the type of puppy the family would choose.

The Obamas opted for a Portuguese Water Dog because their eldest daughter Malia, ten, suffers from allergies and, rather than fur, the breed has hair it does not shed.

Its distinctive curly coat is similar to a poodle’s and needs trimming every couple of months, particularly around the eye area. 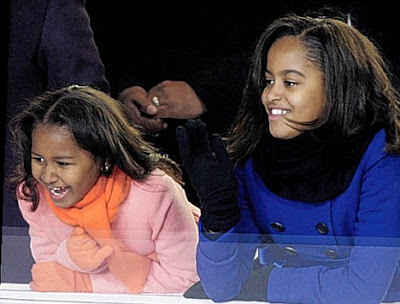 Sasha and Malia now have a new friend in the White House.

In an interview with People magazine in February, First Lady Michelle Obama confided she favoured the Portuguese breed and that a dog would be moving in after the Easter holidays.

She said the family had discussed names with Malia and her seven-year-old sister Sasha but had rejected Moose and Frank.

The 77-year-old, who is battling brain cancer, is said to have persuaded the Obamas that the breed was ‘perfect’ for the White House. 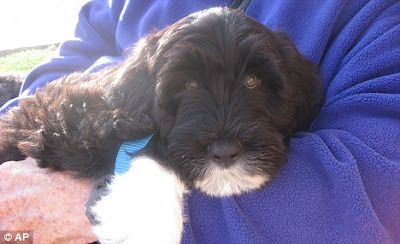 The source said: ‘Senator Kennedy got his dogs from the same kennels and they have been robust, healthy and very good-natured animals.

‘They are excellent with children but do need lots of exercise which is good because the President is a fitness buff.’

The speculation about the arrival of the First Dog reached fever pitch after a public event in the new White House vegetable garden last Thursday.

David Frei of the Westminster Kennel Dog Show, America’s Crufts, said: ‘I’m not surprised by the intense interest in the First Family’s pet. It’s something everyone can relate to.’

Meanwhile, it was revealed yesterday that a British ancestor of Mr Obama left 12 pence to his son in his will.

Farm labourer Peter Blossom, from Stapleford, near Cambridge, left the sum – equivalent to £7.66 today – to his son, Thomas, who sailed to America around 1620, writing, ‘I can give unto him no more.’

Historian Alan Bullwinkle, 88, from Stapleford, who collected the will from his local record office, said: ‘I don’t think leaving him 12 pence was a snub. He gave what he could.’